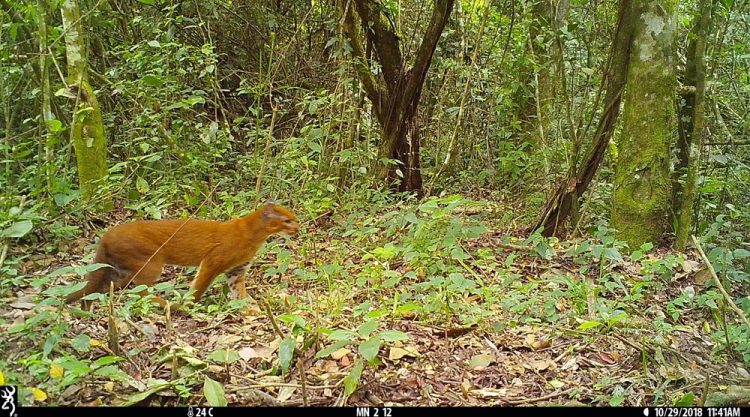 The golden cat is a mid-size feline, males reaching 14 kg and 1.3 m, including the tail. The colour of the fur varies from intense orange to the typically “golden”, and from grey to dark brown and even the intense black of melanistic animals. The only truly specialized forest-dweller cat in tropical Africa, an agile ambush hunter of small antelopes and other prey, the golden cat, (Caracal aurata) is threatened by illegal hunting and habitat destruction.

Its distribution is centred in the Congo basin, but some populations are found along the coasts of West Africa while others stretch as far as East Africa. In areas where it still lives, it is extremely elusive, to the point that it has earned the reputation of “Africa’s least known felid”.

It was never been reported in Tanzania so far, but now its presence has been detected as part of a study to investigate the biodiversity status of a unique rainforest – the Minziro Nature Reserve – located in the north-western corner of Tanzania, bordering Uganda.

Being the forest an “outlier” in East Africa of central and western Africa rainforest biome, it was already known to hold unique fauna for Tanzania, but knowledge was extremely scant. Thanks to the deployment, in the fall of 2018, of 65 camera-traps by the team of researchers coordinated by Francesco Rovero, researcher of the Department of Biology at the University of Florence, and collaborator of MUSE, several individuals of this cat were photographed in different areas of the reserve.

“We are finishing data analyses (almost 6,000 images that together depict more than 25 species of mammals) – Rovero said – but this finding highlights how unique Minziro Nature Reserve is, and we hope it will serve to trigger further research and, most critically, greater protection of the Nature Reserve, which is newly established. Our assessment found that the forest is heavily threatened by hunting, livestock grazing and timber harvesting. The imminent construction of a pipeline encroaching the Western edge of the reserve potentially adds to these threats, but mitigation strategies are being planned.”

The study that led to the discovery of the golden cat in Tanzania was assigned to MUSE of Trento – a museum of science with long-standing presence in the country –assisted by various partners including the Department of Biology of the University of Florence and the Tanzania’s College of African Wildlife Management – and implemented with Tanzania Forest Service, the Government agency that manages Nature Reserves in Tanzania.