Home / Life Sciences / The mechanism of action of an antitumor drug used for the treatment of glioblastoma
03.05.2019 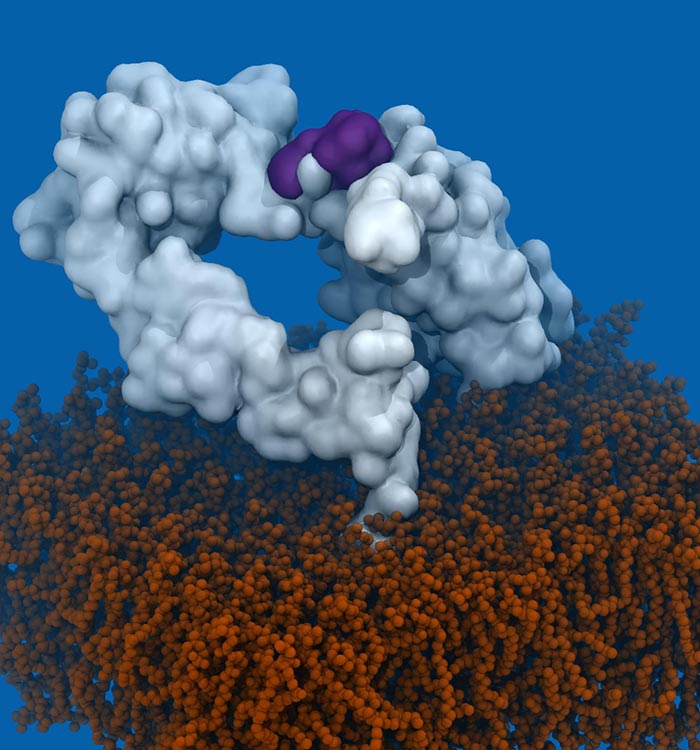 This is the structure of EGFR. Purple indicates the region recognised by mAB806. Credit: Laura Orellana

Published in the journal PNAS, the study paves the way for new treatments for cancer. The results of the work indicate that, in contrast to what was previously believed, mAb806 could be used to treat many tumours that carry EGFR mutations and not only for a specific mutation.

Furthermore, the scientists have demonstrated that even when EGFR is not mutated, it can be treated in order to make it susceptible to mAb806 therapy.

“This finding lays the rational basis for anti-EGFR combination treatments with antibodies and kinase inhibitors, instead of “blind testing” them, as has been done until now,” says Modesto Orozco, head of the Molecular Modelling and Bioinformatics Lab at IRB Barcelona and senior professor of the Faculty of Chemistry at the University of Barcelona.

More than 100 mutations in EGFR have been described to give rise to glioblastoma. By means of computational simulation, Laura Orellana, first author of the study who began this project during her PhD at IRB Barcelona and is now a researcher at Stockholm University, discovered that the mutations studied induced a similar change in the shape of the receptor.

“Surprisingly, this change in EGFR matches the shape recognised by mAb806, but this hadn't previously been observed experimentally,” she comments.

Previous studies had reported that mAb806 recognises a region of EGFR that is normally hidden. In certain tumours carrying EGFRvIII, half of the receptor has been removed, so that this region becomes accessible, thereby allowing the therapeutic use of the antibody.

The researchers have now demonstrated that many different mutations on EGFR change the shape of the receptor, allowing mAb806 to detect this “hidden” region.

These changes in the shape of EGFR affect its activation. While analysing computational simulations of EGFR, Orellana discovered that while a part of the receptor is “eliminated in EGFRvIII, in other mutants this same part is “displaced”, with the same objective of activating the receptor.

“This surprising finding provides a rational basis to explain why distinct mutations in glioblastoma respond to drugs in a similar manner,” explains Orellana. “Mutations that are seemingly different are in fact equivalent and have the same effect on the receptor, driving the formation of a tumour”.

In collaboration with the Ludwig Institute for Cancer Research and the University of California San Diego, the researchers validated this computational hypothesis using cell and animal models, which confirmed the therapeutic potential of mAb806a.

“Given the numerous clinical assays underway with mAb806 worldwide, the translation of these results into clinical practice will be much faster than normal, and treatment with this antibody is expected to be suitable for many types of tumour that carry similar mutations, such as tumours found in the colon, breast and skin,” says Orozco.

The study was funded by the Ministry of Science, Innovation and Universities, ICREA, the Catalan Government, the European Research Council, Vetenskapsrådet and the Swedish e-Science Research Center (E.L.)

Oncogenic mutations at the EGFR ectodomain structurally converge to remove a steric hindrance on a kinase-coupled cryptic epitope.