Home / Life Sciences / The “everywhere” protein: honour for the unravellor of its biology
19.10.2017

The “everywhere” protein: honour for the unravellor of its biology 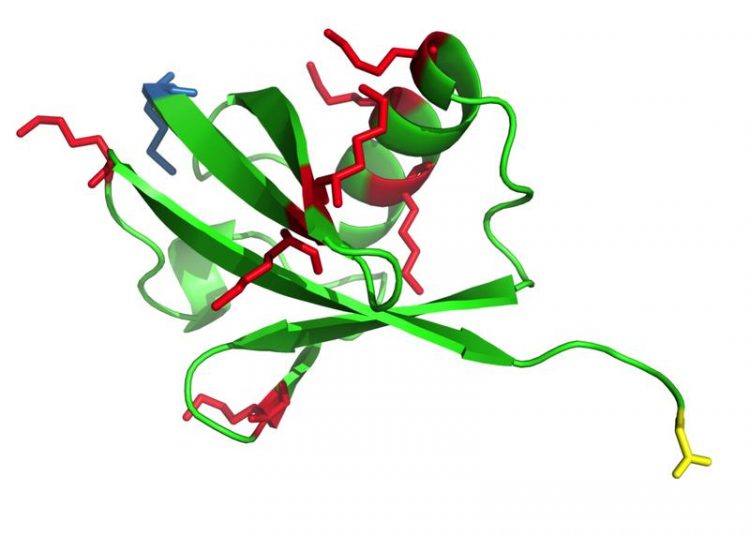 Three-dimensional structure of the protein ubiquitin. In red, areas where ubiquitin can attach to itself to form chains, blue is the N-end, yellow the C-end of the amino acid chain. Paul Riviere, CC_BY-SA 3.0 - https://en.m.wikipedia.org/wiki/File:Ubiquitin_Lysines.png

Anything that influences proteins can have wide-ranging consequences. After all, they are the workhorses of every cell, in that they carry messages, form barriers, sense and regulate the cell’s status, build and tear down structures, as well as constitute many of the cell’s building materials. It was thought that cells control their protein levels – and thereby many of their functions – mainly by regulating the production of new proteins.

“But with his ground-breaking work Dr Varshavsky has demonstrated that cells use the ubiquitin system to finely orchestrate which proteins will be destroyed and when, and that this is as important for balancing protein levels as their production”, states Professor Felix Wieland, Chair of the Board selecting the laureates.

“Dr Varshavsky has thereby established ubiquitin as a master regulator in a wide range of processes from the cell’s cycle of growth and division, to repairing DNA, to how cells respond to stress.” In addition, Dr Varshavsky has developed new biochemical and genetic methods, several of which having become major tools for biomedical research. He has used them to identify a number of players of the more than 1,500 components of the ubiquitin system that are involved in specifically adding ubiquitin to other proteins to mark them for destruction.

Dr Varshavsky was the first to have identified signals that cells use to determine the lifespan of proteins. Some proteins are targeted for destruction by the ubiquitin system mere minutes after being produced, while others persist for hours or even days. Proteins are chains of different amino acids.

Dr Varshavsky found that their lifespans depend on which amino acids are present at their so-called N-end. The ubiquitin system recognizes certain amino acids at the N-end as degradation signals and selectively attaches ubiquitin to target the proteins for destruction. Different adapted versions of this so-called N-end rule exist in all living organisms, from bacteria, to fungi, animals, and plants.

Over the last two decades, it has also become clear, in part through studies by Dr Varshavsky, that malfunctions of the ubiquitin system can underlie many diseases, including Alzheimer’s, diabetes, cancer, and immune deficiencies.

Given its central role, it is no surprise that the ubiquitin protein itself has changed very little over the course of evolution. Indeed, only 3 of its 76 amino acids differ between yeast and human ubiquitins. Its name derives from the Latin word ubique, meaning everywhere, because it was found in all examined cells at that time, although no one knew what it did. Ubiquitin is attached to other proteins through a series of steps involving three different types of enzymes called E1, E2, and E3.

In humans, there is only one major E1, about 40 different E2 enzymes, and nearly 1,000 different E3 enzymes. Its many components, especially its large number of E3s, enables the system to react very specifically to different proteins and situations within the cell. It can mark a protein for either slow or fast destruction. Ubiquitin can also alter the activity or functions of specific proteins, or define where a protein is located in a cell. In addition, a protein can have not only to one ubiquitin attached to it, but a whole chain of them, thereby opening further ways to regulate protein fate. The first example of such chains was also discovered by Dr Varshavsky and his co-workers.

The overall importance of Dr Varshavsky’s discoveries over the last three decades can be measured by the fact that many of them have spawned major biomedical fields, making him directly or indirectly responsible for new medical therapies and a large part of modern fundamental biology.

The award ceremony of the 2017 Heinrich Wieland Prize on 19 October in Munich and its accompanying scientific symposium will bring together some 130 scientists, to discuss Dr Varshavsky’s work and honour the man whose discoveries have revolutionized our understanding of many of the cell’s processes.

Alexander Varshavsky – the biography
Alexander Varshavsky was born in Moscow in 1946. He studied chemistry at Moscow State University until 1970 and received his PhD in biochemistry from Moscow’s Institute of Molecular Biology in 1973. In 1977, he was able to leave the Soviet Union through fortunate circumstances, as legal emigration was impossible at that time. With the assistance of U.S. scientists, Dr Varshavsky moved to the United States and was offered a faculty position at the Massachusetts Institute of Technology (MIT) in Cambridge, Massachusetts. Fifteen years later, in 1992, he moved his laboratory to the California Institute of Technology (Caltech) in Pasadena, California, where he is now Smits Professor of Cell Biology at the Division of Biology and Biological Engineering. Dr Varshavsky is a member of the American Academy of Arts and Sciences and the U.S. National Academy of Sciences. He has received a number of major awards, including the Gairdner International Award, the Lasker Award in Medical Research, the Max Planck Award, the Albany Prize, and the Breakthrough Prize in Life Sciences.

Heinrich Wieland Prize – the award
This international award honours outstanding research on biologically active molecules and systems in the fields of chemistry, biochemistry and physiology as well as their clinical importance. The 100,000-euro prize is named after the Nobel Laureate Heinrich Otto Wieland (1877–1957) and has been awarded annually since 1964. Among the awardees – selected by a scientific Board of Trustees – are four later Nobel Laureates. Since 2011, the prize has been endowed by the Boehringer Ingelheim Foundation.
www.heinrich-wieland-prize.de

Boehringer Ingelheim Foundation – the donor
The Boehringer Ingelheim Foundation is an independent, non-profit organization committed to the promotion of the medical, biological, chemical, and pharmaceutical sciences. It was established in 1977 by Hubertus Liebrecht (1931–1991), a member of the shareholder family of the company Boehringer Ingelheim. With the Perspectives Programme “Plus 3” and the Exploration Grants, the foundation supports independent junior group leaders. It also endows awards for up-and-coming scientists. In addition, the foundation has donated 100 million euros over ten years to the University of Mainz for the scientific running of the Institute of Molecular Biology (IMB) and a further 50 million euros for the development of the life sciences.
www.bistiftung.de

Alexander Varshavsky and ubiquitin – the beginning
Alexander Varshavsky’s interest in ubiquitin goes back to 1977, just months after he arrived in the United States. At that point, ubiquitin was known to be present in all examined cells, but its function was unknown. Dr Varshavsky started to study how it interacted with chromosomes, the packaging units of DNA. During this time, studies in cell-free systems by Avram Hershko and co-workers in Israel made it clear that ubiquitin was also involved in protein degradation. Together with his own studies, this suggested to Dr Varshavsky “a regulatory system of great complexity and broad, still-to-be-discovered biological functions. I decided to find genetic approaches to the entire problem, because a system of such complexity was unlikely to be understood through biochemistry alone.”

He found this first genetic approach to the ubiquitin problem with a certain type of mutant mouse cell called ts85 – ts standing for temperature-sensitive. These cells could not grow and divide at higher temperatures. In 1984, Dr Varshavsky and his team showed that these cells contained a mutant E1 enzyme, which became inactive at higher temperatures interrupting the pathway necessary to attach ubiquitin to other proteins. Dr Varshavsky and his co-workers found this led to the cessation of the bulk of in vivo protein degradation. This was the first (and definitive) evidence that ubiquitin attachment was essential for protein degradation in living cells, as distinguished from cell-free systems. His later genetic and biochemical studies discovered specific biological functions of ubiquitin attachment, including its essential roles in cell cycle progression, DNA repair, stress resistance, and the regulation of gene expression. More than 30 years and many discoveries by Dr Varshavsky and others later, the field of ubiquitin and related studies continues to be a major, still growing, and highly dynamic part of modern biomedical science.