The birth of vision, from the retina to the brain 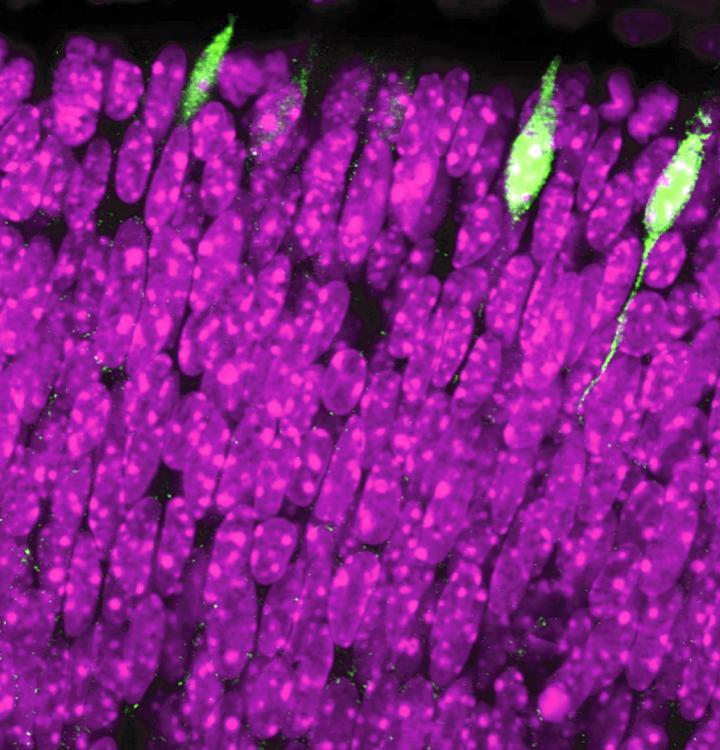 Photoreceptors cells responsible for colour vision. By sequencing one cell at a time, the researchers identified a gene (Rbp4) present in a small number of cells (in green). In purple, photoreceptors in which the Rbp4 gene is not activated. Credit: © UNIGE, Pierre Fabre

How is the retina formed? And how do neurons differentiate to become individual components of the visual system?

By focusing on the early stages of this complex process, researchers at the University of Geneva (UNIGE), Switzerland, in collaboration with the École Polytechnique Fédérale de Lausanne (EPFL), have identified the genetic programmes governing the birth of different types of retinal cells and their capacity to wire to the correct part of the brain, where they transmit visual information.

In addition, the discovery of several genes regulating nerve growth allows for the possibility of a boost to optic nerve regeneration in the event of neurodegenerative disease. These results can be discovered in the journal Development.

The visual system of mammals is composed of different types of neurons, each of which must find its place in the brain to enable it to transform stimuli received by the eye into images. There are photoreceptors, which detect light, optic nerve neurons, which send information to the brain, cortical neurons, which form images, or interneurons, which make connections between other cells.

Though not yet differentiated in the early stages of embryonic development, these neurons are all produced by progenitor cells that, are capable of giving rise to different categories of specialized neurons. To better understand the exact course of this mechanism and identify the genes at work during retinal construction, researchers studied the dynamics of gene expression in individual cells.

“To monitor gene activity in cells and understand the early specification of retinal neurons, we sequenced more than 6,000 cells during retinal development and conducted large-scale bioinformatic analyses,” explains Quentin Lo Giudice, PhD student in the Department of Basic Neurosciences at the UNIGE Faculty of Medicine and first author of this article.

Mapping a system under construction

In collaboration with Gioele La Manno and Marion Leleu of EPFL, the researchers studied progenitor's behaviour during the cell cycle as well as during their progressive differentiation. The scientists then mapped very accurately the different cell types of the developing retina and the genetic changes that occur during the early stages of this process.

“Beyond their “age”–that is, when they were generated during their embryonic life–the diversity of neurons stems from their position in the retina, which predestines them for a specific target in the brain,” explains Pierre Fabre, senior researcher in the Department of Basic Neurosciences at the UNIGE Faculty of Medicine, who directed this work.

“In addition, by predicting the sequential activation of neural genes, we were able to reconstruct several differentiation programs, similar to lineage trees, showing us how the progenitors progress to one cell type or another after their last division.”

This convergence makes it possible to see binocularly and perceive depths or distances. “Knowing this phenomenon, we have genetically and individually “tagged” the cells in order to follow each of them as they progress to their final place in the visual system,” says Quentin Lo Giudice.

By comparing the genetic diversity of these two neural populations, researchers discovered 24 genes that could play a key role in three-dimensional vision. “The identification of these gene expression patterns may represent a new molecular code orchestrating retinal wiring to the brain,” adds Dr. Fabre.

Even before the neurons reach the brain, they must leave the retina through the optic nerve. The last part of this study identified the molecules that guide neurons on the right path. Moreover, these same molecules also allow the initial growth of axons, the part of neurons that transmits electrical signals to the synapses and thus ensures the passage of information from one neuron to another, as well as about twenty genes that control this process. This discovery is a fundamental step forward for regenerative medicine.

The more we know about the molecules needed to appropriately guide axons, the more likely we are to develop a therapy to treat nerves trauma. “If the optic nerve is cut or damaged, for example by glaucoma, we could imagine reactivating those genes that are usually only active during the embryonic development phase.

By stimulating axon growth, we could allow neurons to stay connected and survive,” explains Dr. Fabre, who plans to launch a research project on this theme. Although the regeneration capacities of neurons are very low, they do exist and techniques to encourage their development must be found. Genetic stimulation of the damaged spinal cord after an accident is based on the same idea and is beginning to show its first successes.