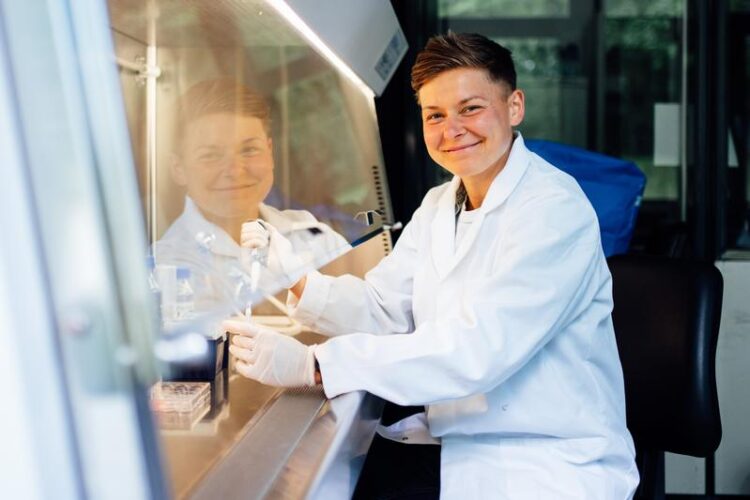 In her doctoral thesis, Juliane Bauch investigated the reason why multiple sclerosis results in a destruction of the myelin sheaths.
Credit: RUB, Kramer

Researchers at Ruhr-Universität Bochum have been studying the role of the two proteins tenascin C and tenascin R in multiple sclerosis. In this disease, cells of the immune system destroy the myelin sheaths, i.e. the sheaths of the nerve cells. As the Bochum team showed in experiments with mice, the regeneration of the myelin sheaths is inhibited if the two tenascins are present. Dr. Juliane Bauch and Professor Andreas Faissner from the Cell Morphology and Molecular Neurobiology Department in Bochum report their findings in the journal Cells, published online on 28 May 2022.

The reason why multiple sclerosis results in a destruction of the myelin sheaths hasn’t been identified as yet. “But the organism has various mechanisms at its disposal to partially compensate for the lesions,” says Juliane Bauch, who studied this issue in great detail in her doctoral thesis. Her research aims at identifying approaches that could improve the regeneration of myelin sheaths.

Different effects of the two proteins

In addition, Juliane Bauch and Andreas Faissner examined the mechanisms by which the proteins impeded the regeneration process. Tenascin C limited the number of myelin sheaths that were formed. Tenascin R triggered the prevalence of the protein CD68, which drives acute inflammation. Both proteins are also known to limit the movement of oligodendrocytes. Moreover, during myelin membrane repair, they inhibit the development of the protein MBP that is important for myelin membrane formation.

“Our research results open up new therapeutic approaches for the treatment of demyelinating diseases such as multiple sclerosis. The impact of the extracellular matrix on the restoration of myelin membranes is enormous and could become a key target for therapy in the future,” concludes Juliane Bauch.