Tag it EASI – a new method for accurate protein analysis 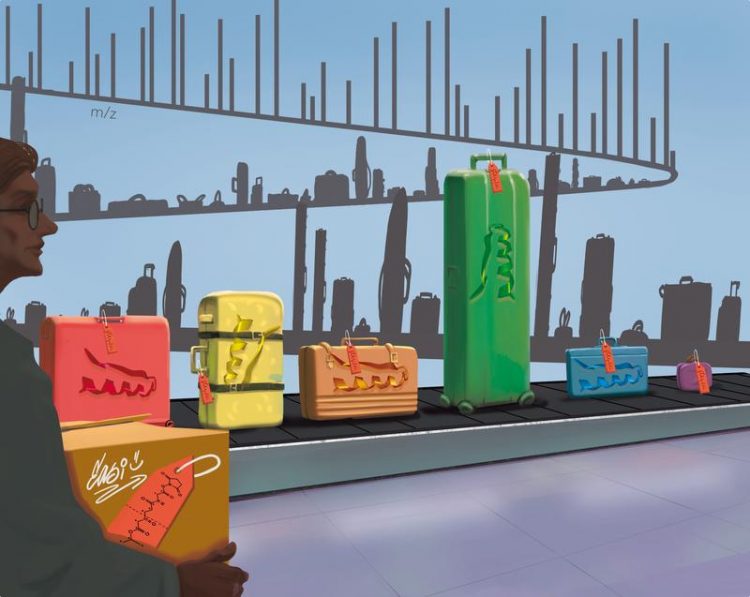 Like tags put on suitcases before a flight, protein samples for mass spectrometry are labelled with the new EASI-Tag before being analyzed. © MPI of Biochemistry

In recent years, researchers have realized that analyzing genetic information is not enough to understand cellular processes in healthy or diseased cells, because proteins are also at work, serving as major signalling molecules, regulators and structural elements.

On the basis of genetic “blueprints”, proteins are formed by stringing together a series of amino acid building blocks. Whereas the genetic information is identical in every cell type in the body, their protein composition can vary widely.

It is therefore no wonder that basic research has focussed on the analysis of proteins. For this purpose, researchers primarily use mass spectrometry. This method determines the quantity and nature of thousands of proteins in a sample, such as tissue specimen. In the past, mass spectrometry was a laborious process, and a major goal has been to simplify it for use in clinical diagnostics.

A team of researchers headed by Felix Meissner and Matthias Mann of the MPI of Biochemistry have now taken a step nearer to this goal. They have developed a labelling method that makes it possible to measure multiple protein samples more accurately than ever before. “Often we want to know how biological materials differ in their protein composition – whether we’re comparing samples from different tissue areas or from healthy and sick individuals,” Meissner explains.

But to do so, it is important to measure the proteins as accurately as possible, because in medicine, for example, defined thresholds are crucial for the diagnosis of disease. “With our new method, we’re able to measure quantitative protein differences between samples much more accurately than with previous methods,” Meissner says. The samples to be compared are analyzed in one measurement. “This reduces the number of measurements, saves time and money and minimizes technical variability that can occur when measuring samples sequentially.”

To distinguish samples from each other, they are labelled with various EASI-Tag molecules before analysis. “It’s comparable to attaching tags to pieces of luggage before a flight. All the pieces of luggage – no matter how different they look – get a small tag. On the aircraft, all the suitcases can be jumbled up, but at the end of the journey ground staff are able to use the tags to assign each piece of luggage to a passenger or group of travellers. In our case, we’re able to assign proteins to a specific sample,” Meissner explains.

On a journey, a suitcase is labelled with a name tag, loaded onto a plane, transported by air and then reallocated to its owner after landing. In the same way, mass spectrometric analysis proceeds in a sequence of steps. However, unlike suitcases on an aircraft, the many thousands of proteins are first enzymatically cut into pieces, and the resulting protein fragments, known as peptides, are labelled with various EASI-Tag molecules.

Multiple samples can then be mixed and analyzed together in a mass spectrometer. As the labelled peptides fly through the mass spectrometer, they are weighed. “At this point, it’s not possible to allocate the peptides to a sample, because the various tags all weigh the same and differ only in their specific arrangement of heavy carbon atoms,” explains Sebastian Virreira Winter, first author of the study.

This is followed by a second analytical step that determines which peptides are present and which sample each belongs to. To identify the composition of the peptides, they are broken into pieces by collisions and are then compared to a database of all possible human peptide fragments. “Like the peptides, the EASI-Tag also breaks at a predetermined location.

Fragments of the same peptides from different samples are distinguished by a defined difference in mass. For example, one peptide from a sample may have a ‘broken’ EASI-Tag with two heavy carbon atoms, while another sample has three. “Now we can compare the signals of the individual samples side by side and are able to measure their differences directly and accurately,” says Virreira Winter.

“Keeping to our analogy of luggage, the suitcases may be smashed at the end of the flight, but we do know exactly what was inside them. We are therefore optimistic that EASI-Tag will open the door wider for many applications where protein quantities need to be measured accurately. We would be delighted if in future our technology e.g. provided doctors with accurate analytical data for making reliable diagnoses,” Meissner concludes.