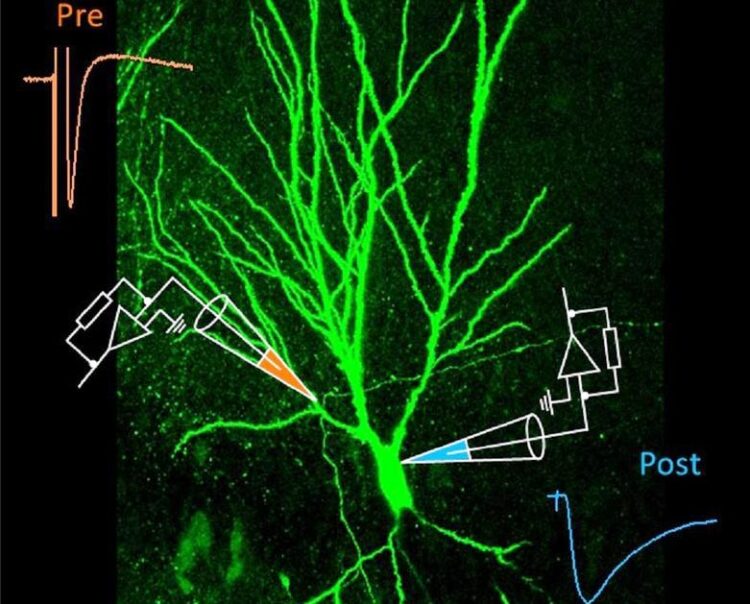 When neuroscientists at the Institute of Science and Technology (IST) Austria analyzed the exact properties of nerve connections in the brain, they made a startling observation: At a key connection, or synapse, messages are sent against the usual stream of information. The study, published in the journal Nature Communications, reports that the signal glutamate likely plays a role in this unusual transmission.

Information flows in a well-defined direction in the brain: Chemical and electrical signals are passed from one neuron to the other across the synapse, from the pre-synaptic to the post-synaptic neuron. Now, Peter Jonas and his group at the Institute of Science and Technology Austria (IST Austria) show that information also travels in the opposite direction at a key synapse in the hippocampus, the brain region responsible for learning and memory.

At the so-called mossy fiber synapse, the post-synaptic CA3 neuron influences how the pre-synaptic neuron, the so-called mossy fiber neuron, fires. “We have shown, for the first time, that a retrograde information flow is physiologically relevant for pre-synaptic plasticity,” says Yuji Okamoto, a postdoc in the group of Peter Jonas at IST Austria and co-first author of the paper published in Nature Communications.

The mossy fiber synapse is crucial for information storage in the neuronal network. Synaptic transmission is plastic meaning that a variable amount of chemical signal, the so-called neurotransmitter, is released into the synapse. To understand the mechanism of plasticity at work in this synapse, Okamoto precisely stimulated the pre-synaptic terminal of the mossy fiber synapse in rats and at the same time recorded from the post-synaptic neuron. “We need to know the synapse’s exact properties – with the numerical values, e.g., for its conductance – to create an exact model of this synapse. With his exact measurements, Yuji managed to obtain these numbers,” adds Peter Jonas, co-corresponding author with postdoc David Vandael.