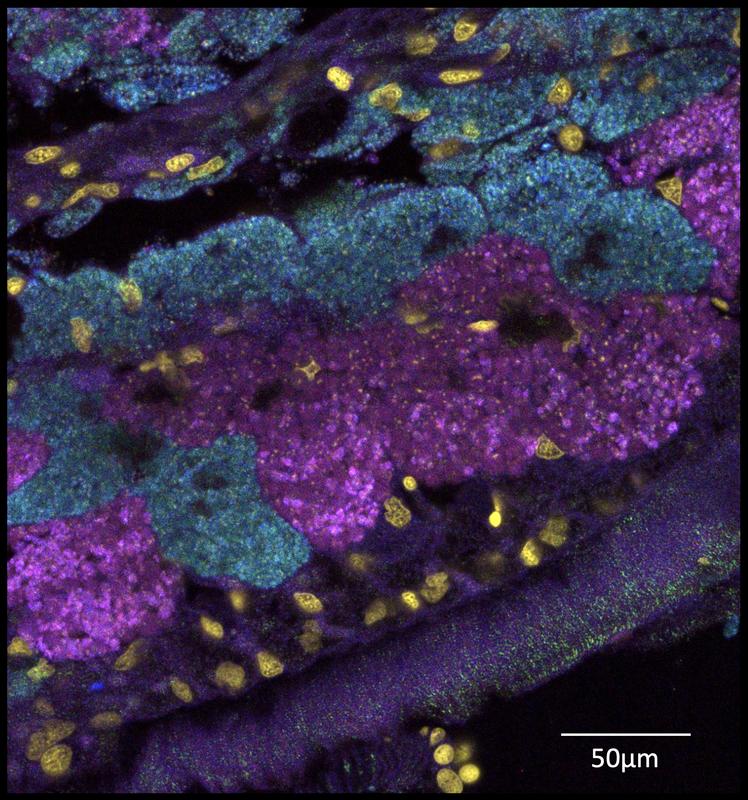 This pandemic year has seen us confined to our homes and restricted from travelling the world. Not so for some microscopic bacteria in the ocean: Throughout the globe, they partner up with clams from the family Lucinidae, which live unseen in the sand beneath the shimmering blue waters of coastal habitats. This partnership is the clams’ passport to their extensive global reach. The bacteria can also travel a long way. According to research by scientists from the Max Planck Institute for Marine Microbiology in Bremen and the University of Vienna now published in PNAS, the bacterial symbionts living in lucinid gills can travel the world without borders.

The Lucinidae family, lucinids for short, comprises approximately 500 living species of bivalves. They are at least 400 million years old, according to fossil records, and have managed to colonize a wide variety of habitats, from beautiful beaches to the abyssal depths untouched by the sun over a kilometer below the sea surface. Their ability to thrive in a wide variety of habitats is made possible by their ‘partner in crime’, a sulfur-oxidizing bacterial symbiont that utilizes hydrogen sulfide, better known as ‘rotten egg gas’, as an energy source to power primary production. This process is not unlike photosynthesis used by plants, yet not dependent on sunlight, and generates enough sugars to feed both the symbiont and the lucinids themselves.

Striking up partnerships from near or far

Finding a suitable partner out in the wild is a matter of life and death for lucinids. They have to pick up their bacterial partners at a very early life stage when they settle in the sediment after their larval stage. From this time on, they rely on their bacterial symbionts for nutrition. However, bacterial cells are miniscule and the oceans are awash with a multitude of possible candidates. Typically, animals that rely so heavily on bacteria are expected to strike up partnerships with local residents. These microbes are likely to work best under the unique conditions of their local habitats. A new study based on metagenomic analyses of symbiotic bacteria in lucinids now reveals that this is not always the case: Some bacterial symbionts travel the globe and are true cosmopolitans.

“Using state-of-art DNA-sequencing and genome assembling, we discovered that a single bacterial symbiont species was the most abundant symbiont in eight lucinid species spanning three oceans – the Atlantic, Pacific and Indian Oceans – across the tropics of both hemispheres,” said Laetitia Wilkins from the Max Planck Institute for Marine Microbiology in Bremen, Germany, shared first author of the publication together with Jay Osvatic from the University of Vienna, Austria. “These symbionts are virtually all over the place.” No other known symbiont is so successful at dispersal and establishing symbioses with lucinids, the researchers report. They named it Candidatus Thiodiazotropha taylori – ”to acknowledge the wisdom of John Taylor from the Natural History Museum in London, who has devoted 25 years of his life to studying lucinid biology and taxonomy”, as Osvatic pointed out.

“This unexpected finding challenges previous concepts that symbionts are acquired locally. It suggests that lucinid symbionts are much more mobile”, Osvatic added. The remarkable flexibility in this partnership is advantageous to both host and symbiont, as it increases the likelihood of locating a compatible partner across diverse habitats all over the globe. Prior to this study, lucinid research has mainly been carried out in easily accessible locations. Now for the first time the team around Wilkins and Osvatic presents an expanded, global dataset that has led to and will continue to facilitate new discoveries and show how distant habitats might be connected.

Just like the relationships between symbionts and lucinid clams, this discovery would not have been possible without the scientists reaching out and forming collaborations across the world. “Our contacts (and now friends) across the world have given us access to an unprecedented diversity of lucinds, both direct from the beaches and from museums across the world”, said Benedict Yuen from the University of Vienna, senior author of the paper. “We were given access to a wide variety of lucinid samples at the Natural History Museum in London through John Taylor. Samples were also collected personally by our team and collaborators Matthieu Leray in Panama, Yolanda Camacho in Costa Rica, Olivier Gros in Guadeloupe and Jan A. van Gils in Mauritania.”

Moreover, the extensive data collection of Wilkins, Osvatic and their team resulted in the discovery of two new lucinid symbionts, which have now been described and named after Miriam Weber and Christian Lott, both former researchers from the Max Planck Institute for Marine Microbiology in Bremen. These symbionts – now known as Thiodioazotropha weberae and lotti – are found in the clam Loripes orbiculatus on the Italian island of Elba, where the symbionts peacefully co-exist in the gills of the same host. “Before genomic analyses were used, it was assumed that each clam hosts only one species of symbionts”, Wilkins explained. “However, many clams on Elba harbor two symbiont species. Miriam and Christian discovered this clam population in the bay of Fetovaia and it is thanks to them that we could amass a very powerful dataset on this symbiosis.”

Next, the researchers want to find out how the symbionts travel. “They leave their bivalve home to traverse the globe”, added co-senior author Jillian Petersen. “Both beneficial symbionts such as Candidatus T. taylori but also pathogens can disperse in the environment, but we usually don’t know how.”