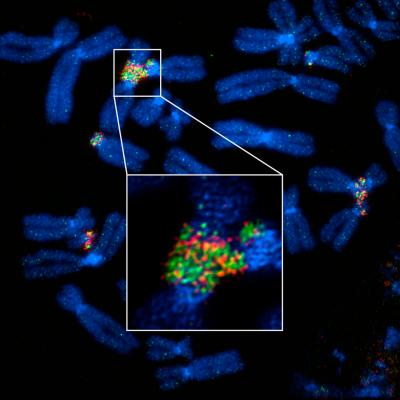 The Stowers Institute for Medical Research scientists probed these physical connections between five of the chromosomes in the human karyotype in a report recently published online in the Journal of Cell Biology.

“Inter-chromosome connections may prove to be an integral and pervasive governing feature of chromosome organization in many types of human cells,” says Stowers Investigator Jennifer Gerton, Ph.D., who led the research team that investigated the basis and function of these linkages.

The linkages were detected during the course of research on the organization of the human genome. Tamara Potapova, Ph.D., a research specialist in the Gerton Lab, collaborated with Stowers Microscopy and Computational Biology teams to use structural image super-resolution microscopy (SIM) technology, which visualizes biological samples at nanoscale resolution, and DNA sequencing analysis in these studies.

Potapova, first author of the paper, explains that she and her colleagues were surprised when the SIM images consistently revealed connections between five of the twenty-three human chromosomes. “We knew there were points of contact between duplicated sister copies of chromosomes, but not between heterologous chromosomes,” she says. “I was fascinated by why the same five chromosomes displayed connections in many different cell types.”

Potapova located several previously published reports of possible inter-chromosomal linkages. Most of these observations were made during cytogenetic investigations, long before the advent of super-resolution microscopy methods.

An early observation of inter-chromosome linkages was published in the journal Lancet in 1961 by the British geneticist Malcolm A. Ferguson-Smith. Because of the very limited resolution of microscopy at that time, the connections were barely visible to Ferguson-Smith, now an emeritus professor at the University of Cambridge. However, in the Lancet paper, he wrote that some of the chromosomes that he observed in his cytogenetic studies seemed to be linked by their short arms like a pair of “acrobats holding hands.”

The Stowers researchers realized that the five chromosomes that displayed inter-chromosomal connections were linked together via a single shared sequence, the ribosomal DNA (rDNA). This sequence encodes the ribosomal RNA (rRNA) molecules essential to the formation of ribosomes, the protein manufacturing factories of cells. These sequences are near the ends of five different human chromosomes and can act as the “hands” of the acrobats, holding the different chromosomes together.

The researchers also detected rDNA connections in many different human cell types. rDNA links were pervasive in both healthy and diseased tissue, indicating they are not pathological, says Potapova.

In the paper, the Stowers researchers and their co-authors from Singapore's Agency for Science, Technology and Research and the Lawrence Berkeley National Laboratory propose that the structural basis of rDNA connections between chromosomes is topological interlockings, or catenations.

The interlocking could occur via a combination of two factors. The first factor is intense transcriptional activity in the nucleolus, the site of ribosome biogenesis in the cell nucleus. The second factor is the presence of strands of rDNA sequences from different heterologous chromosomes in the nucleolus. Because of their close proximity in the crowded environment of the nucleolus, strands of rDNA sequences can bump against each other.

These strands can become interlinked by the actions of the enzyme topoisomerase II. To eliminate supercoiling stress due to high levels of transcription, topoisomerase II must constantly break and rejoin DNA strands. In the paper, the researchers propose that the enzyme could entangle strands from the rDNA regions on two different chromosomes, thereby creating the connections.

The researchers also determined that in addition to forming rDNA connections, topoisomerase II ensures that rDNA connections between chromosomes are resolved when chromosomes divide. Besides topoisomerase II, the research team identified other factors that modulate the connections. Factors that promote the transcription of rDNA increase connections, including the c-Myc gene, a global regulator of ribosome biogenesis and protein synthesis, and the upstream binding factor (UBF) transcription factor, which coats the rDNA linkages.

The Gerton Lab continues to investigate whether other regions of the genome engage in inter-chromosomal connections. Gerton says “The results from these studies have unveiled a new type of chromosome-chromosome interaction. Now we want to know if regions in addition to the rDNA can engage in these types of interaction using similar mechanisms.”

Recent research from the Stowers Institute for Medical Research solves a mystery to a half-century-old observation of connections between particular human chromosomes. In an article recently published in the Journal of Cell Biology, the research team led by Stowers Investigator Jennifer Gerton, Ph.D. uncovers how the connections might be built.

Using super-resolution microscopy, first author Tamara Potapova, PhD, and collaborators determined that these inter-chromosomal linkages are composed of ribosomal DNA, a sequence shared between the connected chromosomes. The findings suggest that the connections are controlled by the proximity of the chromosomes in three-dimensional space and their transcription, which together allow chromosomes to bump into each other and become interlocked. The connections were detected in many kinds of cells, indicating they are a normal type of chromosome-chromosome interaction. However, they could provide clues about the origins of chromosomal fusions associated with infertility and developmental disorders in humans.

The Stowers Institute for Medical Research is a non-profit, basic biomedical research organization dedicated to improving human health by studying the fundamental processes of life. Jim Stowers, founder of American Century Investments, and his wife, Virginia, opened the Institute in 2000. Currently, the Institute is home to about 500 researchers and support personnel, over 20 independent research programs, and more than a dozen technology development and core facilities. Learn more about the Institute at http://www.stowers.org and about its graduate program at http://www.stowers.org/gradschool.