Sugared proteins called proteoglycans start to give up their secrets 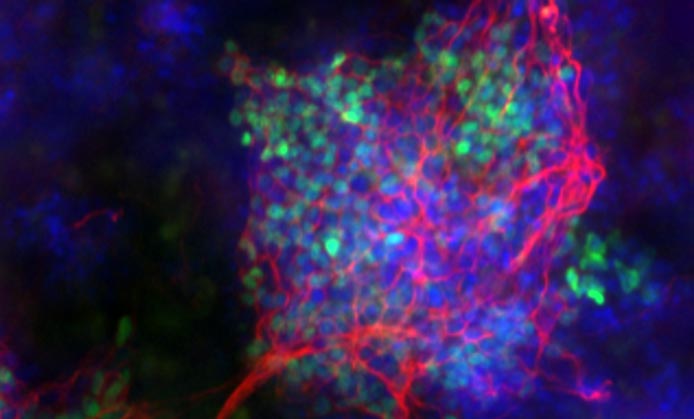 Scripps Research scientists develop a sophisticated platform for building and modifying proteoglycans to dissect their normal roles and their roles in diseases, including cancers.

Scientists at Scripps Research have developed a set of methods for the closer study of one of the least-accessible, least-understood players in biology: protein-sugar conjugates called proteoglycans.

These molecules are often thickly present on the surfaces of cells and are known to have a broad set of functions in the body, though how they work and how their dysfunctions contribute to diseases are largely mysteries.

The scientists, who report their work in Nature Chemical Biology on May 12, 2022, devised synthetic proteoglycans that closely mimic real ones but have convenient chemical handles for modifying them. These and other aspects of their research platform enable the systematic study of how proteoglycans’ structure affects their functions in health and disease. The scientists demonstrated the effectiveness of their platform by using it to make new discoveries about proteoglycans’ roles in early cell development and in cancer cell spreading.

“We’re essentially unpacking the complexity of these molecules by constructing them in a modular way ourselves, and studying them in a tightly controlled environment,” says study senior author Mia Huang, PhD, associate professor in the Department of Molecular Medicine at Scripps Research.

A proteoglycan starts as just a protein—the so-called core protein—but this protein contains special sites where any of a variety of sugar-related molecular chains called glycosaminoglycans (GAGs) can be linked. Within the cell where the protein originates, enzymes catalyze the attachment of GAGs to it, and this newborn proteoglycan normally is further decorated with clusters of sulfur and oxygen atoms called sulfates. The finished proteoglycan may be anchored into the cell membrane, its GAG chains waving in the extracellular fluid like seagrass, or it may be secreted from the cell to perform other functions.

With such complexity, it is no surprise that proteoglycans have versatile functions—they are present in virtually all tissues, including cartilage, collagen, bone, skin, blood vessels, brain cells and mucosal surfaces. They help steer processes such as cell maturation, cell adhesion, cell migration, and neuronal synapse formation; serve as receptors for protein signaling partners; and are even used by some viruses and bacteria to latch onto cells. But proteoglycans’ complexity also means that how they do what they do, and with what partners, remains largely undiscovered. Scientists aren’t even certain how many proteoglycans there are in human and other mammalian cells—although there are at least dozens.

Huang and her team, including first authors Timothy O’Leary, PhD and Meg Critcher, respectively a postdoctoral researcher and doctoral candidate in the Huang Lab during the study, constructed proteoglycan core proteins that are almost identical to known core proteins, but contain special molecular handles enabling the researchers to change the numbers and locations and types of GAG chains that bind to them. This allows the researchers to study systematically how the function of a proteoglycan changes as its GAG arrangement changes.

The researchers also developed techniques allowing them to anchor their proteoglycans in cell membranes or to let them float freely, to see how this affects proteoglycans’ functions in different circumstances.

Using their synthetic versions of common proteoglycans called syndecans, the scientists were able to study the respective contributions of GAG chains and core proteins. Specifically, they looked at two key biological processes mediated by syndecans: the maturing of stem cells, and the spreading of breast cancer cells on an extracellular matrix.

“We learned from these experiments that not only the GAG chains but also the core proteins contribute to proteoglycan function,” says Critcher. “Notably, we also found that proteoglycans’ role in cancer cell spreading depends heavily on whether they are anchored to the cell membrane or free-floating.”

The team also incorporated a method called proximity tagging to help them identify proteoglycans’ interaction partners. Huang and colleagues are now using this, and their modular construction technique, to study the interactions of syndecans and other proteoglycans in different contexts—and with different GAG arrangements—and otherwise to explore their structures and functions.

Scripps Research is an independent, nonprofit biomedical institute ranked the most influential in the world for its impact on innovation by Nature Index. We are advancing human health through profound discoveries that address pressing medical concerns around the globe. Our drug discovery and development division, Calibr, works hand-in-hand with scientists across disciplines to bring new medicines to patients as quickly and efficiently as possible, while teams at Scripps Research Translational Institute harness genomics, digital medicine and cutting-edge informatics to understand individual health and render more effective healthcare. Scripps Research also trains the next generation of leading scientists at our Skaggs Graduate School, consistently named among the top 10 US programs for chemistry and biological sciences. Learn more at www.scripps.edu.