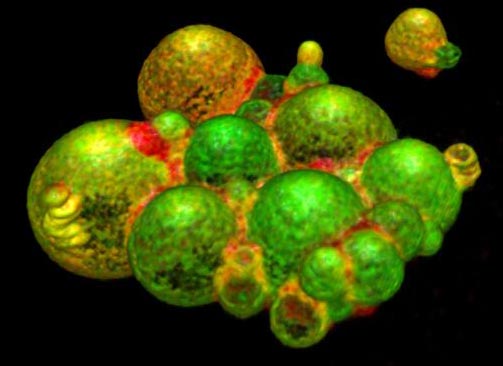 After its success in the first joint call by ERASynBio, the collaborative project Synthetic Glycobiology – new strategies to build and functionalise proto-cells and proto-tissues is now set to receive roughly 1.9 million euros in total funding. SynGlycTis is a collaboration of scientists from Denmark, Germany, the UK, France, and Austria.

Its members include Junior Professor Dr. Winfried Römer from the University of Freiburg and his team of researchers. The University of Freiburg team will now receive roughly 400,000 euros of the project’s overall funding from the German Federal Ministry of Education and Research for a period of 36 months. The scientists in the SynGlycTis project plan to produce so-called proto-cells to study their behaviour.

Proto-cells are artificial systems of vesicle-shaped membranes. They can be produced with the help of giant vesicles, which are also synthetic and imitate the membranes of natural cells. The researchers plan to use these synthetic proto-cells to gain a better understanding of processes in natural systems by replicating these. Proto-cells could also be used in the future as systems to transport active agents, for example. This means, medications could be administered more directly where needed and released over longer periods of time in a controlled way.

Proto-cells are much less complex than natural cells. One important element in natural cells that scientists have not yet been able to integrate in their synthetic counterparts is the so-called glycocalyx, which consists mainly of polysaccharides. It protects the cell membrane and also plays an important role in the interaction between cells, among other things. Lectins, which are proteins that can bind sugar, are also important for cellular interaction.

Some pathogens, like viruses and bacteria, use sugar-protein interaction to enter human cells. Sugar-protein interaction can also cause the formation of proto-organelles and proto-tissues. That is why Römer’s team is investigating not only the integration of components in giant vesicles, but also interaction within the proto-cell with the help of fluorescence and atomic force microscopes. The team’s goal is to build proto-organelles and proto-tissues.

The ERASynBio project provides funding for synthetic biology by structuring and coordinating research and necessary investments in several countries. Its goal is to establish a European research community in this field. ERASynBio is part of the seventh Framework Programme for research and technological development in the European Union.

Römer is a junior professor of synthetic biology of signalling processes at the cluster of excellence BIOSS Centre for Biological Signalling Studies and the Institute of Biology II of the University of Freiburg. He is also member of the Spemann Graduate School of Biology and Medicine, the International Research Training Group Soft Matter Science and the Max Planck Research School for Molecular and Cellular Biology (IMPRS-MCB) at the Max Planck Institute of Immunobiology and Epigenetics (MPI-IE) in Freiburg.