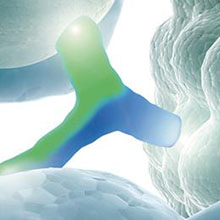 As a rule, anti-tumor antibodies are administered to the patients intravenously. This usually takes several hours because otherwise a too rapid activation of the immune system can lead to significant adverse side effects.

The research group led by Prof. Dr. Ralph Mocikat of the Institute of Molecular Immunology (IMI), Helmholtz Zentrum München, therefore tested the subcutaneous delivery of the antibodies. For this purpose, the scientists used a special class of multispecific, so-called trifunctional*, antibodies. Specifically, they tested an antibody that was developed by Trion Research GmbH to combat melanoma cells.

Evenly released into the body

“Overall, our results from the mouse model show that the subcutaneous administration of trifunctional antibodies has significant advantages in comparison to the standard intravenous therapy,” said lead author Nina Deppisch. “Although the bioavailability is lower – that is, the quantity of active agents in the bloodstream is less – the antibodies are better tolerated, with undiminished effectiveness against the tumor.”

The researchers hypothesize that this good tolerability is due to the subcutaneous method of administering the antibodies because these are slowly and evenly released into the body from under the skin, like from a depot. “Inflammation markers such as the levels of certain cytokines confirm this,” Deppisch said.

Treatment in the future: subcutaneous rather than intravenous?

The researchers view two aspects as particularly promising: “First, the study once again demonstrates the effectiveness of trifunctional antibodies,” said Mocikat. “Their advantage is that they generally bring about long-lasting immunity against the tumor instead of fighting it only for a brief period. Second, our results show that tumor treatment can be put on a broader basis with regards to its availability for patients. Perhaps, due to this better tolerability, a hospitalization of the patient will no longer be necessary, since the subcutaneous administration can take place in a matter of minutes instead of hours.“ The researchers want to explore this issue in further studies.

*Trifunctional antibodies form a subclass of multispecific antibodies. The two binding sites in the variable regions are different here: One binds to a surface antigen on cancer cells, the second on the body’s own T cells and the constant part to scavenger cells of the innate immune system (macrophages, monocytes, and dendritic cells). The destruction of the cancer cells is then carried out by two different mechanisms: The T cells initiate the lysis of the tumor cells (apoptosis), and the cells of the innate immune system destroy the cancer cells by phagocytosis and necrosis. The resulting cellular debris is presented to the immune system, thus resulting in long-term immunity.

The Institute of Molecular Immunology (IMI) performs application-oriented basic research at the interface of immunology, oncology and molecular biology. The objectives of the Institute are to elucidate the basic mechanisms of the immune system, to understand the pathogenesis of immunologically mediated diseases and to directly transfer insights gained in basic research into clinical applications. The Institute focuses on developing new personalized treatment strategies for the targeted modulation of the immune system.

The independent Trion Research GmbH was founded in 1998 by Horst Lindhofer as a Spin-off company of the Helmholtz Zentrum München. TRION Research is an independent research organization offering specialized preclinical and clinical services to the biopharmaceutical industry, from initial drug design through to clinical studies.