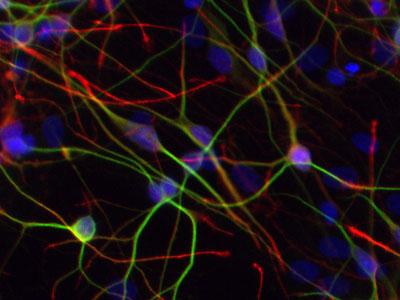 In this imag, cell nuclei are shown in blue and synapses in red and green. Credit: Zhexing Wen/Johns Hopkins Medicine

The study, led by Guo-li Ming, M.D., Ph.D., and Hongjun Song, Ph.D., of the Johns Hopkins University School of Medicine and described online Aug. 17 in the journal Nature, used stem cells generated from people with and without mental illness to observe the effects of a rare and pernicious genetic variation on young brain cells. The results add to evidence that several major mental illnesses have common roots in faulty “wiring” during early brain development.

“This was the next best thing to going back in time to see what happened while a person was in the womb to later cause mental illness,” says Ming. “We found the most convincing evidence yet that the answer lies in the synapses that connect brain cells to one another.”

Previous evidence for the relationship came from autopsies and from studies suggesting that some genetic variants that affect synapses also increase the chance of mental illness. But those studies could not show a direct cause-and-effect relationship, Ming says.

One difficulty in studying the genetics of common mental illnesses is that they are generally caused by environmental factors in combination with multiple gene variants, any one of which usually could not by itself cause disease. A rare exception is the gene known as disrupted in schizophrenia 1 (DISC1), in which some mutations have a strong effect. Two families have been found in which many members with the DISC1 mutations have mental illness.

To find out how a DISC1 variation with a few deleted DNA “letters” affects the developing brain, the research team collected skin cells from a mother and daughter in one of these families who have neither the variation nor mental illness, as well as the father, who has the variation and severe depression, and another daughter, who carries the variation and has schizophrenia. For comparison, they also collected samples from an unrelated healthy person. Postdoctoral fellow Zhexing Wen, Ph.D., coaxed the skin cells to form five lines of stem cells and to mature into very pure populations of synapse-forming neurons.

After growing the neurons in a dish for six weeks, collaborators at Pennsylvania State University measured their electrical activity and found that neurons with the DISC1 variation had about half the number of synapses as those without the variation. To make sure that the differences were really due to the DISC1 variation and not to other genetic differences, graduate student Ha Nam Nguyen spent two years making targeted genetic changes to three of the stem cell lines.

In one of the cell lines with the variation, he swapped out the DISC1 gene for a healthy version. He also inserted the disease-causing variation into one healthy cell line from a family member, as well as the cell line from the unrelated control. Sure enough, the researchers report, the cells without the variation now grew the normal amount of synapses, while those with the inserted mutation had half as many.

“We had our definitive answer to whether this DISC1 variation is responsible for the reduced synapse growth,” Ming says.

To find out how DISC1 acts on synapses, the researchers also compared the activity levels of genes in the healthy neurons to those with the variation. To their surprise, the activities of more than 100 genes were different. “This is the first indication that DISC1 regulates the activity of a large number of genes, many of which are related to synapses,” Ming says.

The research team is now looking more closely at other genes that are linked to mental disorders. By better understanding the roots of mental illness, they hope to eventually develop better treatments for it, Ming says.