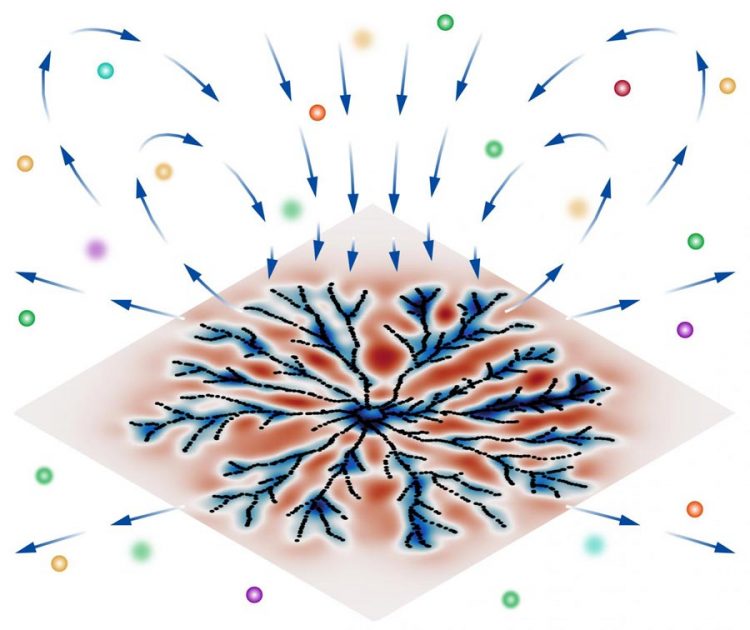 This depiction of a bacterial colony arranged in a branching pattern shows how the bacteria can create a swirling current that pulls in nutrients, shown here as colored dots. Credit: Arnold Mathijssen

Leading an international team of researchers in creating simulations of how fluids move, Mathijssen found that individual bacteria and biofilms can generate currents strong enough to draw distant nutrients.

In their work, published Dec. 11 in Physical Review Letters, the researchers were able to find predictable patterns of how fluids move based on the general shapes of biofilms, insights that could find applications in many fields.

“There is a very strong universality in the physical properties of micro-hydrodynamics,” said Mathijssen, who works in the lab of Manu Prakash, associate professor of bioengineering. “We've talked about bacteria but we could replace the word 'organism' with 'micro-robot' and the physics would be exactly the same.”

When bacteria move, they disturb the liquids that surround them in the microscopic world. The researchers explored the strength of that disturbance in a single bacterium that moves in a way that is similar to many pathogenic species, including those that cause gastritis and cholera. They found that as this bacterium swims forward, it creates a tiny but stable current in the surrounding liquid with fluid moving toward its center and away from the head and tail.

Then, they calculated the flows produced by a colony of randomly arranged bacteria and were surprised to see that it created a strong, consistent tide capable of pulling in nutrients. This occurred regardless of the orientation of each bacterium so long as the colony was thicker in some areas than others, which causes fluid to move from high points to low points. Simulations of more orderly bacteria resulted in even stronger circulation.

Within organized biofilms, the researchers found two common patterns of movement: vortexes and asters. In a vortex pattern, the bacteria move in concentric circles and produce a flow that brings nutrients down to the biofilm's center and then pushes the fluid out the sides. In an aster pattern, the bacteria move toward a central point, creating a flow that moves from the edge of the biofilm until it rises back up, over the center.

“The powerful thing about this is you can add these patterns up,” Mathijssen said. “Rather than having to know the position and orientation of every single bacterium, you only need to know the basic patterns that make up the colony and then it's very easy to derive the overall transport flow.”

The researchers were able to combine vortex and aster patterns within a single biofilm to determine how the bacteria would push, pull and whirl the fluids around them. As a final test, the researchers took calculations representing the complex, realistic motion of bacteria swarming – as they might on the surface of a table – and predicted the strength of that swarm's transport flow. The result were large vortices that spanned distances beyond the boundaries of the biofilm, suitable for keeping the colony fed.

This work started with simple curiosity about the invisible flow of fluids around bacteria. But what the researchers discovered could be quite practical – guiding ways of cutting off an infectious biofilm's source of food, for example. What's more, because it only takes into account a bacterium's shapes and movement, the research also could apply to inanimate objects like synthetic drug delivery mechanisms or micro-robots.

“This started off as a relatively fundamental problem but turned out to be more relevant for biomedical applications than we would have predicted,” Mathijssen said. “That's what excites me: we just stumbled upon an idea that, by curiosity, drove us in a very different direction than where we started and what we found has a lot of potential.”

Co-authors of this paper include Francisca Guzmán-Lastra of Universidad Mayor and Universidad de Chile, Andreas Kaiser of Pennsylvania State University and Hartmut Löwen of the Heinrich Heine University Düsseldorf.

This research was funded by the Human Frontier Science Program, the Ministry of Economy, Development and Tourism in Chile, and the Deutsche Forschungsgemeinschaft.