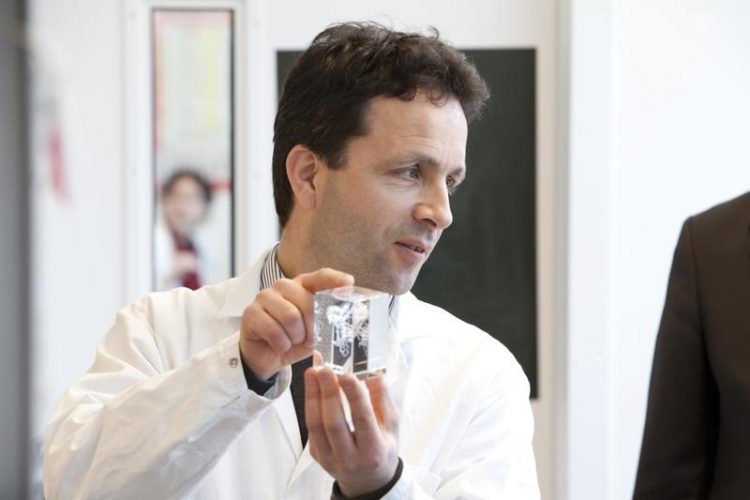 A Jacobs University work group, led by Prof. Sebastian Springer, professor for Biochemistry and Cell Biology, has recently published two papers in the journal Science Immunology in collaboration with scientists from Germany and Denmark.

In these papers they introduced revolutionary new methods to accelerate tumor immunotherapy, to customize it to the individual patient, and to decrease the costs out of the procedure.

The innovations of the Jacobs researchers concern a group of proteins called the MHC (Major Histocompatibility Complex) proteins. They are present at the surface of all body cells, and serve as ‘flags’ for the immune system to recognize if a cell has turned into a tumor cell.

The T cells, white blood cells of the immune system, recognize the MHC proteins on the surface of a tumor cell with their T cell receptors, which enables the T cells to eliminate the tumor cell. This amazing property of the T cells is used for tumor immunotherapy.

For their work in diagnosis and therapy, doctors and researchers often need purified MHC proteins. They are used to test whether purified T cell receptors (which are used to direct drugs directly to tumor cells) react only with the tumor and not with healthy body tissues to make sure that the anti-tumor drugs have as few side effects as possible.

THE MHC proteins are furthermore used to detect the anti-tumor T cells of the cancer patient and to make sure that they are multiplying properly.

MHC proteins have been particularly difficult and tedious to produce which was a bottleneck in research and diagnosis. “Whenever a researcher needed MHC proteins, they had to ask an external company to produce them. And the necessary process took four to six weeks”, explains Prof. Springer.

“Of course, this elaborate procedure caused major problems if doctors had a sick patient they needed to diagnose, or if researchers were following a really urgent scientific project. The problem was that every MHC protein contains a little piece of a tumor called a peptide, which varies from one patient to the other, and without this peptide, the MHC proteins were unstable and perished quickly, even if it was kept in the fridge.”

In intensive work that spanned a decade, Springer identified a place in the MHC protein that could be stabilized by introducing a so-called disulfide bridge, a chemical crosslink that makes the MHC proteins more rigid. His collaborators at the Technical University of Denmark in Copenhagen, led by Prof. Sine Reker Hadrup, found that the stabilized MHC protein performed as well as the old reagent when used to detect T cells in patient samples, but amazingly, the production time was now speeded up from weeks to seconds, because the peptide could now be added to the diagnostic reaction at the very last moment.

“We were just amazed when we saw how well it worked”, says Springer. These results and the data are now being published in Science Immunology. Springer, Hadrup, two further researchers and Jacobs University already founded a company, Tetramer Shop, to produce and sell this innovative reagent. Researchers and pharma companies all over the world that work on T cell immunotherapy have shown a very high interest in the company.

In their second innovation that is now also published in Science Immunology, the Jacobs University researchers worked with the Tübingen company Immatics, who showed that the disulfide-stabilized MHC reagents are superior tools for testing T cell receptors that are used as reagents for the actual treatment of tumors. “Here, too, it was most important that the MHC reagents were stable and could be produced very rapidly. We are very excited that our technology has different uses, and we are certain that there will be many more uses,” says Springer.

“These inventions show that Jacobs University, based on its strength in fundamental science, can generate tailored scientific solutions for companies. We look forward to developing these relationships for mutual benefit”, resumes Prof. Dr. Michael Hülsmann, President of Jacobs University.

Licences to the disulfide stabilization technology for MHC proteins are available through the Tetramer Shop.

About Jacobs University Bremen:
Studying in an international community. Obtaining a qualification to work on responsible tasks in a digitized and globalized society. Learning, researching and teaching across academic disciplines and countries. Strengthening people and markets with innovative solutions and advanced training programs. This is what Jacobs University Bremen stands for. Established as a private, English-medium campus university in Germany in 2001, it is continuously achieving top results in national and international university rankings. Its more than 1,400 students come from more than 100 countries with around 80% having relocated to Germany for their studies. Jacobs University’s research projects are funded by the German Research Foundation or the EU Research and Innovation program as well as by globally leading companies.