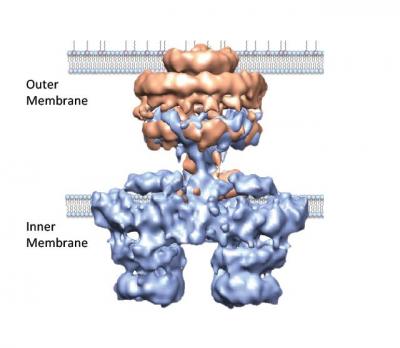 Bacterial type IV secretion system structure reveals how antibiotics resistance genes move from one bacterium to another. Credit: Image from the Nature paper

The study, published today in Nature, reveals the mechanism of bacterial type IV secretion, which bacteria use to move substances across their cell wall. As type IV secretion can distribute genetic material between bacteria, notably antibiotic resistance genes, the mechanism is directly responsible for the spread of antibiotic resistance in hospital settings. It also plays a crucial role in secreting toxins in infections – causing ulcers, whooping cough, or severe forms of pneumonia such as Legionnaires' disease.

The work, led by Professor Waksman at the Institute of Structural and Molecular Biology (a joint Birkbeck/UCL Institute) and funded by the Wellcome Trust, revealed that the type IV secretion system differs substantially from other bacterial secretion systems, in both its molecular structure and the mechanism for secretion.

Professor Waksman said: “This work is a veritable tour de force. The entire complex is absolutely huge and its structure is unprecedented. It is the type of work which is ground-breaking and will provide an entirely new direction to the field. Next, we need to understand how bacteria use this structure to get a movie of how antibiotics resistance genes are moved around.”

Using electron microscopy the team were able to reconstruct the system as observed in the bacteria E. coli. They saw that the mechanism consists of two separate complexes, one in the outer membrane of the cell, and the other in the inner membrane, which are connected by a stalk-like structure that crosses the periplasm – the space between the two membranes. The complexes at both the inner and outer membranes form pores in the membrane, via which substances can be secreted.

Understanding the structure of the secretion system will help scientists uncover the mechanism by which it moves substances across the inner and outer membranes. It could eventually help scientists develop new tools for the genetic modification of human cells, as the bacteria could act as a carrier for genetic material, which could then be secreted into cells.

Professor Waksman said: “Understanding bacteria's secretion system could help design new compounds able to stop the secretion process, thereby stopping the spread of antibiotics resistance genes. Given that antibiotics resistance has become so widespread and represents a grave threat to human health, the work could have a considerable impact for future research in the field of antimicrobials.”

For interviews with Professor Waksman or for images, please contact Bryony Merritt, Media and Communications Officer at Birkbeck, University of London on 020 7380 3133/ b.merritt@bbk.ac.uk

About Birkbeck, University of London

Birkbeck is a world-class research and teaching institution, a vibrant centre of academic excellence and London's only specialist provider of evening higher education. Birkbeck is ranked among the top one per cent of universities in the world in the Times Higher Education World University Rankings 2012. We encourage applications from students without traditional qualifications and we have a wide range of programmes to suit every entry level. 18,000 students study with us every year. They join a community that is as diverse and cosmopolitan as London's population.

Founded in 1826, UCL was the first English university established after Oxford and Cambridge, the first to admit students regardless of race, class, religion or gender and the first to provide systematic teaching of law, architecture and medicine.

We are among the world's top universities, as reflected by our performance in a range of international rankings and tables. According to the Thomson Scientific Citation Index, UCL is the second most highly cited European university and the 15th most highly cited in the world.

UCL has nearly 27,000 students from 150 countries and more than 9,000 employees, of whom one third are from outside the UK. The university is based in Bloomsbury in the heart of London, but also has two international campuses – UCL Australia and UCL Qatar. Our annual income is more than £800 million.

About the Wellcome Trust

The Wellcome Trust is a global charitable foundation dedicated to achieving extraordinary improvements in human and animal health. It supports the brightest minds in biomedical research and the medical humanities. The Trust's breadth of support includes public engagement, education and the application of research to improve health. It is independent of both political and commercial interests. http://www.wellcome.ac.uk