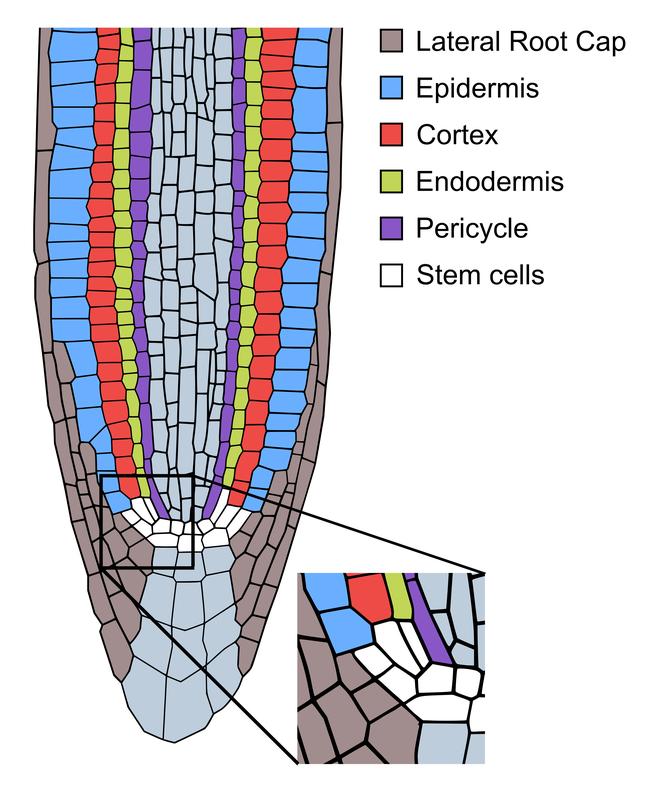 A root tip consists of constantly dividing cells of specific types which originate from a few stem cells in the stem cell niche located in the very tip of the root (white cells). IST Austria/Lukas Hörmayer

If plants are injured, cells adjacent to the wound fill the gaps with their daughter cells. However, which cells divide to do the healing and how they manage to produce cells that match the cell type of the missing tissue has been unclear.

Scientists from the Institute of Science and Technology Austria (IST Austria) have now shown that to correctly replace dead cells, neighbors to the inside of the wound re-activate their stem cell programs.

All plant organs—from the leaves to the root—regularly endure injuries to their tissue, be it due to mechanical forces, grazing animals, or other factors. While animals rely on specialized migrating cells for wound healing, plants, whose cells are immobile, had to evolve other mechanisms:

It has been known for almost a century that in plants, cells adjacent to the wound replace harmed tissue with new daughter cells. Yet, a completely new aspect of plant wound healing in the sensitive root tip has only been discovered now:

The research team around first authors Petra Marhava, former PhD student at IST Austria, current PhD student Lukas Hörmayer, and former IST postdoc Saiko Yoshida—all three of them in the group of Jiří Friml—has found out that injured or destroyed root cells are not simply replaced by a proliferation of healthy cells from the same cell type above and below to the wound.

Instead, specifically the cells adjacent to the inner side of the injury reactivate their stem cell programs to produce de novo cells of the correct type to replace missing neighbors. The researchers termed this newly discovered process “restorative patterning”, involving “restorative cell division”.

The missing neighbor: Tissue gaps activate division of “healing cells” in adjacent tissue
With a UV laser, Marhava et al. removed individual cells or small cell groups in the root tip of the model plant Arabidopsis thaliana. Live imaging via the innovative vertical stage microscope—developed in a previous project at IST Austria—allowed them to track the wound healing process in vivo.

However, compared to regular proliferative divisions, the cell cycle of these “healing cells” happened significantly faster and included a shift of division planes by 90 degrees, allowing the cells to arrange perpendicular to the root axis (for the root to grow in length, root tip cells usually arrange parallel to the root axis).

After cell division was complete, genetic marking showed that the resulting cell types matched those of the missing cells. For example, if a missing cortex cell was to be replaced by a newly generated daughter cell from an adjacent endodermis cell, this daughter cell acquired the new and “correct” cell type of a cortex cell.

Thus, activated “healing cells” are able to divide asymmetrically, i.e. they generate daughter cells of a different type than the mother cell—a process that typically only occurs in the root’s stem cell niche, the region where stem cells emanate from.

The roots of curiosity: Next generation scientist is looking closely at plant growth processes

How a stem cell program—i.e. transcription factors and the corresponding genes guiding restorative cell division including the switch of the division plane orientation—in an already specialized cell is activated, remains unknown. However, for Lukas Hörmayer, this study is only the beginning—not only as this paper is his first publication during his PhD program at IST Austria:

“We are convinced that in further studies, molecular genetics, among other methods, will reveal not only a broader understanding of the underlying mechanisms of plant wound healing, but also, how plants establish and maintain their body patterns.” Having grown up on a winery in Lower Austria, plants have always fascinated the young scientist: “This is a look far into the future, but the mere thought of what other discoveries beyond present knowledge my plant root research may bring about, drives my curiosity,” Hörmayer concludes.

IST Austria
The Institute of Science and Technology (IST Austria) is a PhD-granting research institution located in Klosterneuburg, 18 km from the center of Vienna, Austria. Inaugurated in 2009, the Institute is dedicated to basic research in the natural and mathematical sciences. IST Austria employs professors on a tenure-track system, postdoctoral fellows, and doctoral students. While dedicated to the principle of curiosity-driven research, the Institute owns the rights to all scientific discoveries and is committed to promote their use. The first president of IST Austria is Thomas A. Henzinger, a leading computer scientist and former professor at the University of California in Berkeley, USA, and the EPFL in Lausanne, Switzerland. The graduate school of IST Austria offers fully-funded PhD positions to highly qualified candidates with a bachelor's or master's degree in biology, neuroscience, mathematics, computer science, physics, and related areas.