Small fish reflect on their enemies 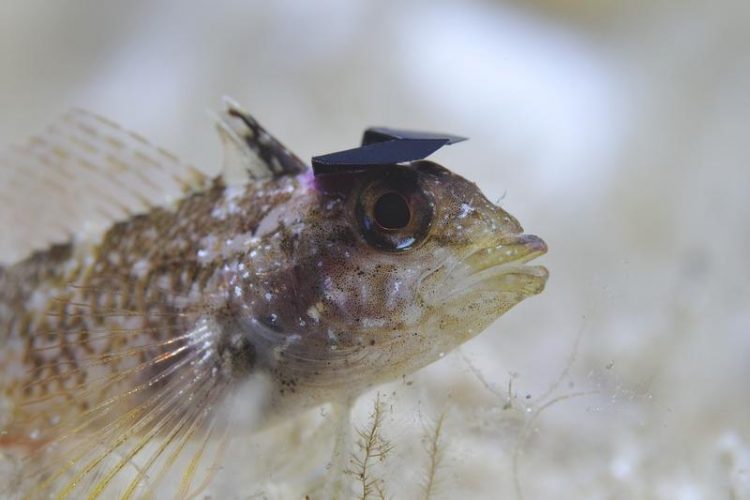 A team headed by Professor Nico Michiels from the Institute of Evolution and Ecology at the University of Tübingen has now shown that the fish actively reflects light to locate predators such as the Black Scorpionfish (Scorpaena porcus).

When the deflected sunlight hits the eyes of a scorpionfish, it is reflected back ‒ and warns the triplefin to keep a safe distance. The results of Michiels' team have been published in the latest Proceedings of the Royal Society B.

Some animal species actively send out signals and detect their reflections to locate prey or nearby objects. For example, bats emit ultrasound to find their way by echolocation. Using the emission of light to trigger visible reflections was previously only known from nocturnal flashlight fish. These use bioluminescence to improve their vision in the dark.

But until now, there has been no research into the use of sunlight by diurnal fish such as triplefins. Just four centimeters long, the Yellow Black-faced Triplefin lives at a depth of about ten meters in the Atlantic and Mediterranean.

It can tilt and rotate its eyes to deflect the incident sunlight from its iris. Previously, the Tübingen biologists already proposed that this can help it to find tiny shrimps, their favorite prey.

The current study now demonstrates that this mechanism also allows triplefins to improve visual detection of their predator. Scorpionfish are common, well-camouflaged sit-and-wait predators on marine substrates. When the light deflected by a triplefin reaches a scorpionfish’s retro-reflecting eyes, they light up like cat's eyes, warning the triplefin of the danger.

In laboratory and field experiments in Corsica, the Tübingen biologists attached tiny hats to the fish to prevent them from redirecting sunlight. Treated like this, triplefins approached a scorpionfish (presented behind glass) closer than their hatless counterparts in the control group did.

If a neutral object like a stone was presented, all fish approached it closely, regardless of how they had been treated.

“The deflected light is weak,” says Professor Nico Michiels, “but visual modelling shows that it can generate a reflection in the scorpionfish’s eyes that is strong enough to be perceived by the triplefin.”

Michiels and his team estimate that they can detect this change in pupil brightness over distances of seven centimeters or more. This is enough to escape from a lurking scorpionfish. “We suspect that this form of active perception is widespread in small fish,” Michiels says.