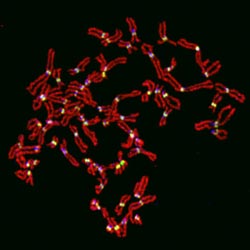 Another protein glue usually makes it possible for our genes to be copied and kept together as parallel strands before neatly splitting into two batches of separate chromosomes to become the nucleus of new cells, according to research published in the current issue of the scientific journal Cell (November 24, 2010).

The action of the ‘sister’ glue called sororin may be the missing link in the way the main glue protein called cohesin allows identical DNA strands to bind together in such a stable way that all the chromosomes in a cell can line up and then divide into their two groups during cell division. It is this action which makes all sex possible, allowing genes from two different people, the parents, to mix together to make a new unique individual, their baby.

It is also the mechanism which most often goes wrong in embryo fertilisation in older mothers, leading to miscarriages during pregnancy or genetic abnormalities such as Down’s syndrome babies born with their characteristic facial features and mental retardation. Recent research has shown that as many as 35% of human eggs from women in their forties have either an extra or a missing chromosome. Now scientists have finally started to study the mechanism behind these mistakes made within our bodies.

“We believe that this second glue protein, sororin, is critical in understanding the way embryo cells make these mistakes when copying chromosomes”, says Jan-Michael Peters from the Institute of Molecular Pathology, Vienna, Austria, who led the new research.

The puzzle has been to find out how the glue protein, cohesin makes the two halves of each copied chromosome stick together until exactly the right moment when a cell divides. It has to stop itself being prematurely cut by other proteins in the cell nucleus which act as biological scissors when the cell separates.

Now the Austrian research team has discovered that the new glue protein sororin acts as a shield for the cohesin, protecting it from being removed from DNA too early, stopping the individual members of the pairs of chromosomes drifting free from each other.

“If the cohesion lets go too soon, the individual chromosome halves run the risk of ending up in the wrong cell nucleus, which could mean that a new egg cell has one too many or one too few chromosomes”, says Tomoko Nishiyama from the Peters research team. “This can lead to an unviable egg, an embryo that dies in the womb, a miscarriage, or a baby born with genetic abnormalities like Down’s syndrome”.

“While this work gives us a new and important bit of basic information about cell division, it also points us towards further research in understanding exactly what goes wrong with the missing and extra chromosomes which cause genetic diseases”, Jan-Michael Peters adds.

About the IMP
The IMP is a basic research institute in Vienna, Austria. Its main sponsor is Boehringer Ingelheim International, headquartered in Germany. With over 220 employees from 30 different nations,the IMP is a Center of Excellence in the life sciences and the core unit of the Campus Vienna Biocenter. Research at the IMP aims at elucidating the molecular basis of normal development and disease.
Contact
Dr. Heidemarie Hurtl
IMP-IMBA Communications
Tel. +43 1 79730-3625
mobile: +43 (0)664 8247910
hurtl@imp.ac.at
Scientific Contact
Dr. Jan-Michael Peters
Jan-Michael.Peters@imp.ac.at