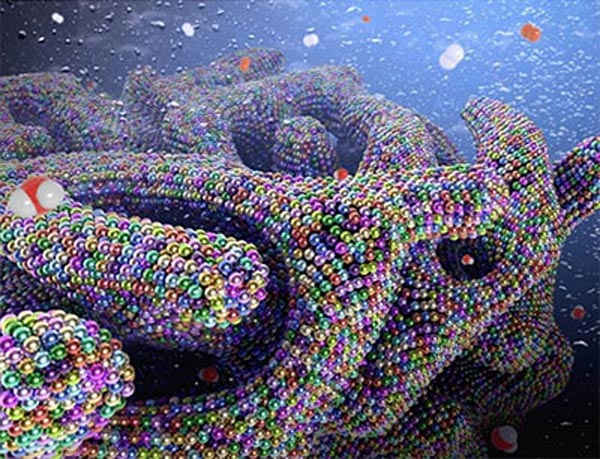 The nanoporous super multi-element catalyst can be made from an Al alloy containing 14 elements dealloyed by an alkaline solution such as NaOH. ©Takeshi Fujita

A research group in Japan has successfully developed a “nanoporous super multi-element catalyst” (1) that contains 14 elements (2) which are mixed uniformly at the atomic level and used as a catalyst. A high-entropy alloy composed of 10 or more elements may act as a catalyst to exhibit” omnipotency and versatility” being able to freely modify its morphology and become active according to the reaction field. However, so far, it has not been easy to produce entropy alloys composed of more than 10 elements. The reason is the existence of combinations of some elements that are hard to be mixed, like water and oil.

A joint research group led by Research Associate Cai ZeXing and Professor Takeshi Fujita at School of Environmental Science and Engineering, Kochi University of Technology, and Professor Masahiro Miyauchi at School of Materials Science and Engineering, Tokyo Institute of Technology has developed a “nanoporous super multi-element catalyst” by a method called de-alloying(3) via the selective corrosion and elusion of a specified element from the alloy. The fabrication method is simple: an aluminum alloy containing 14 elements is prepared, and the nanoporous super multi-element catalyst is manufactured by preferential dissolution of aluminum using an alkaline solution. It has been found that, by using this method, while creating a nanoporous structure with a large specific surface area (surface area per unit mass of material) with a pore size of about 5 nanometers, elements other than aluminum that do not dissolve in the alkaline solution are accumulated to be aggregated in the form of a solid solution alloy (4) in which the 14 elements are uniformly distributed at the atomic level.

Further, the nanoporous super multi-element catalyst was found to show excellent properties as an electrode material for water electrolysis due to the multi-element superposition effect (cocktail effect) (5). As this catalyst contains many different elements, it is expected to be developed into an omnipotent and versatile catalyst in the future.

A method of selectively eroding and eluting specific elements from an alloy. It is also called selective corrosion.

An alloy in which two or more elements are mutually melted in each other to form a uniform solid phase.

Manifestation of a characteristic feature resulting from nonlinear interaction between various constituent atoms. It is expected to reveal particular and outstanding catalytic properties so far inexistent in conventional alloy catalysts.