The secret life of millipedes 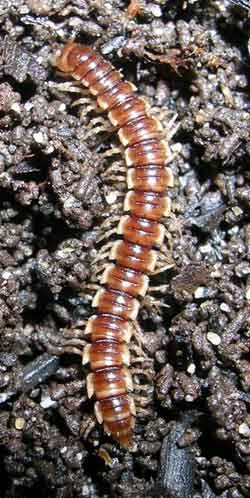 Millipede puberty is a radical affair. The change in function from leg to gonopod can occur within a couple of moults, during which the millipede typically adds more segments to its length and sheds its too-small skin.

These animals are difficult to study with standard techniques due to their hard exoskeleton, because secretions from their stink-glands interfere with most conventional microscopy preparation techniques. However, using confocal laser scanning microscopy, researchers from the University of Padova were able to investigate this dramatic transformation throughout the relevant moults.

Conversion of legs to gonopods first requires regression of the legs in segment VII into tiny primordia. The primordia then develop into gonopods and the exoskeleton rearranges, producing a gonopodal sac which shelters the base of the gonopods and a U-shaped apodeme, to act as an anchor point for the bulky muscles required to operate the gonopods. In three species out of the four investigated, some of these muscles, both protractors and retractors , extend to attach to skeletal structures on the flanking segments, VI or VIII, and another muscle (abductor) stretches across the pair of appendages to move them apart in a pincer movement.

Dr Leandro Drago, one of the team who performed this work, said that, “Conversion of legs into specialized gonopods via non-systemic metamorphosis is not a simple matter of changing the appearance of the legs and adding spines. The exoskeleton and muscle reorganization of segment VII during sexual development forces the nerve cord to become displaced and a causes a reduction in the volume of digestive tract through this segment.”

Dr Drago continued, “This may well impact the amount of food an adult male millipede can eat and may be why they appear to lose weight when sexually mature. Males of some species of millipede can revert back into an immature stage (periodomorphosis) which may be an adaption to prevent starvation.”

1. Structural aspects of leg-to-gonopod metamorphosis in male helminthomorph millipedes (Diplopoda)
Leandro Drago, Giuseppe Fusco, Elena Garollo and Alessandro Minelli
Frontiers in Zoology (in press)
Please name the journal in any story you write. If you are writing for the web, please link to the article. All articles are available free of charge, according to BioMed Central's open access policy.

Article citation and URL available on request at press@biomedcentral.com on the day of publication.

2. Frontiers in Zoology is an Open Access, peer-reviewed online journal publishing high quality research articles and reviews on all aspects of animal life.

3. BioMed Central (http://www.biomedcentral.com/) is an STM (Science, Technology and Medicine) publisher which has pioneered the open access publishing model. All peer-reviewed research articles published by BioMed Central are made immediately and freely accessible online, and are licensed to allow redistribution and reuse. BioMed Central is part of Springer Science+Business Media, a leading global publisher in the STM sector.