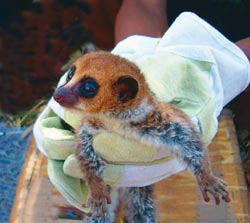 The island of Madagascar harbors a unique biodiversity that evolved due to its long-lasting isolation from other land masses. Numerous plant and animal species are found solely on Madagascar. Lemurs, a subgroup of primates, are among the most prominent representatives of the island’s unique fauna. They are found almost exclusively on Madagascar.

The only exceptions are two species of the genus Eulemur that also live on the Comoros Islands, where they probably have been introduced by humans. Thanks to extensive field research over the past decades, numerous previously unknown lemur species have been discovered. Dwarf lemurs in turn received relatively little attention to date and the diversity within this genus is still not well known.

Researchers of the universities of Mainz and Antananarivo have investigated lemur populations in southern Madagascar. Based on fieldwork and laboratory analyses, they now identified a previously unknown species of dwarf lemur. The findings of the research project have recently been published in the journal Molecular Phylogenetics and Evolution.

“Together with Malagasy scientists, we have been studying the diversity of lemurs for several years now,” said Dr. Andreas Hapke of the Institute of Anthropology at Johannes Gutenberg University Mainz (JGU). “It is only now that we were able to determine that some of the animals examined represent a previously unknown species.”

The newly described Lavasoa Dwarf Lemur (Cheirogaleus lavasoensis) inhabits three isolated forest fragments in the extreme south of Madagascar. According to current knowledge, it does not occur outside this area. The exact population size is unknown. Preliminary estimates indicate that there are less than 50 individuals remaining. The Lavasoa Dwarf Lemur is thus rare and extremely endangered.

The lifestyle of dwarf lemurs makes them extremely difficult to study as these nocturnal forest dwellers often remain in the upper parts of the forest canopy. Moreover, they hibernate for several months during the austral winter. Their main period of activity is the rainy season, when many of the forests they inhabit are virtually inaccessible to scientists. Nevertheless, the researchers were able to carefully capture a total of 51 dwarf lemurs in live traps at nine locations for this study and to take minute tissue samples before releasing the animals back into their natural habitat.

The tissue samples were subjected to molecular-genetic analyses at the Institute of Anthropology at Mainz University. The data generated through the process were then compared with data already published by other research groups. “The new data from southern Madagascar enabled us to significantly enlarge existing datasets,” explained Dana Thiele of the JGU Institute of Anthropology. “We then used extensive data analyses to examine the genetic diversity in two closely related lemur genera, the mouse lemurs (Microcebus) and the dwarf lemurs (Cheirogaleus). The comparison showed that the species diversity of dwarf lemurs is greater than previously thought.”

Andreas Hapke and Refaly Ernest, working as a local field assistant for the project, had discovered the first individuals of the Lavasoa Dwarf Lemur during a field study in Madagascar in 2001. Few genetic data from other parts of the island were available for comparison at that time. The animals were thus initially assigned to an already known species, Cheirogaleus crossleyi. Only now it was possible to ascertain that the Lavasoa Dwarf Lemur is a distinct species.