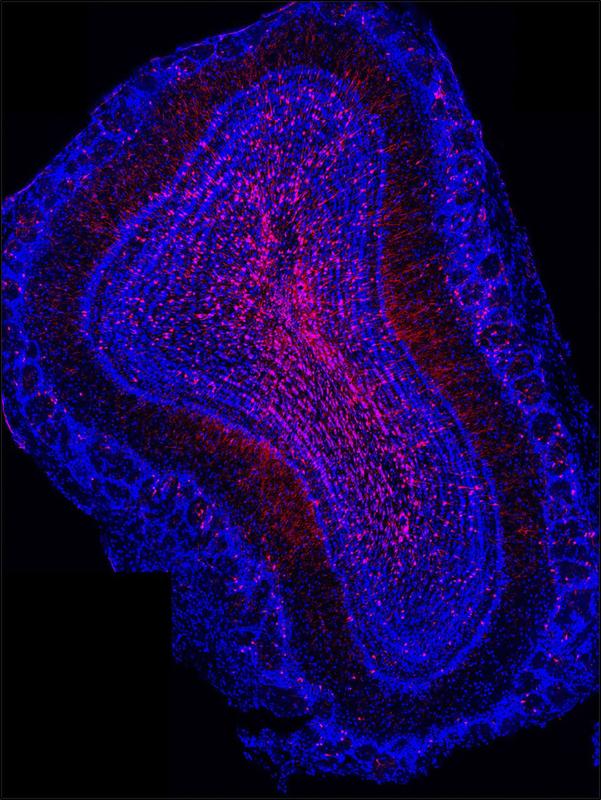 Image of the extra neurons (in red) artificially generated in the olfactory bulb, the brain area responsible for interpreting odors ©CRTD

Most neurons in the human brain are generated from neural stem cells during embryonic development. After birth, a small reservoir of stem cells remains in the brain that keeps on producing new neurons throughout life.

However, the question arises as to whether these new neurons really support brain function? And if so, can we improve brain capacity by increasing the number of neurons?

The research group of Prof. Federico Calegari at the Center for Regenerative Therapies Dresden (CRTD) of TU Dresden has answered these questions, now published in the renowned EMBO Journal.

In their latest study, the scientists analysed healthy adult mice in which the small reservoir of stem cells was manipulated in order to increase in number. As a result, the number of neurons, generated from these stem cells, also increased.

In mice, these neurons mainly populate the brain area responsible for interpreting odours. In fact, olfaction is one to the most powerful senses in mice, fundamental for finding food and escape from predators.

As powerful as the sense of smell naturally is in mice, in the following behavioural experiments the scientists found that mice with more neurons were able to distinguish extremely similar odours that normal mice failed to. Hence, this study is fundamental in proving that stem cells can be used to improve brain function.

“Evolution gave mice an extremely sensitive olfactory system. It is amazing that by adding few neurons we could improve something that seemed already close to perfection”, states Prof. Federico Calegari.

“This study sets the basis for our research, which now is focused on finding out whether we could apply our strategy as a therapeutic approach in neurodegenerative models.”

The CRTD at TU Dresden is the academic home for scientists from more than 30 nations. Their mission is to discover the principles of cell and tissue regeneration and leveraging this for recognition, treatment and reversal of diseases.

The CRTD links the bench to the clinic, scientists to clinicians to bring expertise in stem cells, gene-editing and regeneration towards innovative therapies for neurodegenerative diseases such as Alzheimer's and Parkinson's disease, haematological diseases such as leukaemia, metabolic diseases such as diabetes, retina and bone diseases. The group of Prof. Federico Calegari focusses on mammalian neural stem cells in the context of development, evolution and cognitive functions.

This study was financed by TU Dresden / CRTD, DFG German Research Foundation and the Human Frontiers Science Program. It was performed in collaboration with the Heidelberg University, Gutenberg University Mainz and King’s College London and was supported by the Center for Molecular and Cellular Bioengineering (CMCB) of TU Dresden.