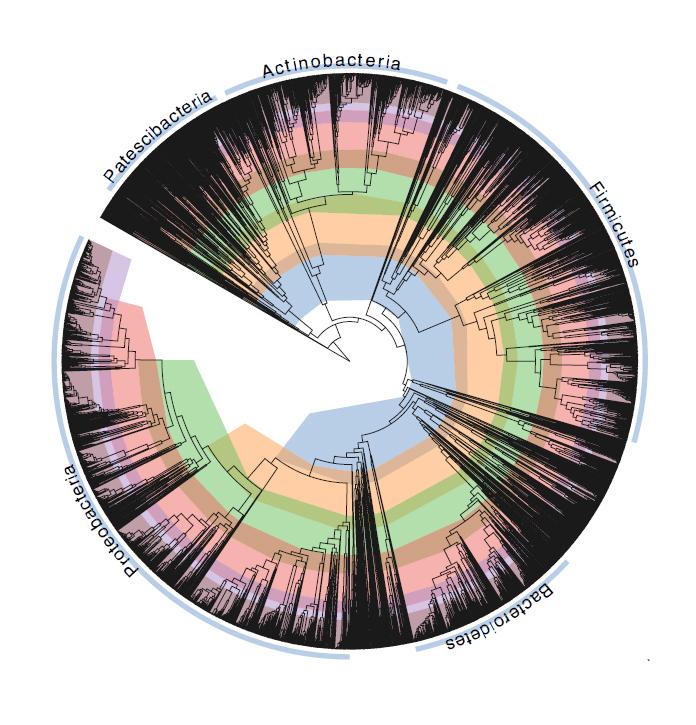 The 'tree of life' for the bacterial world, bacteria's taxonomy in a phylogenetic tree. Credit: The University of Queensland Usage Restrictions: Only to be used with this story.

The study, led by Professor Philip Hugenholtz from UQ's School of Chemistry and Molecular Biosciences and the Australian Centre for Ecogenomics (ACE), relied on a technique called metagenomics, where bacterial genomes are obtained straight from environmental samples, to create a more complete picture of the structure of the bacterial kingdom.

“Taxonomy helps us classify living things by arranging them in a hierarchy from closely to distantly related organisms according to ranks, such as species, genus, family, order, class, phylum and domain,” he said.

“It's a system that helps us understand how organisms are related to each other, just like we do for time – using seconds, minutes, hours, and so on – or for geographic locations, using a street number, street, suburb, state and country.”

Professor Hugenholtz said the scientific community generally agrees that evolutionary relationships are the most natural way to classify organisms, but bacterial taxonomy is riddled with errors, due to historical difficulties.

“This is mainly because microbial species have very few distinctive physical features, meaning that there are thousands of historically misclassified species,” he said.

“It's also compounded by the fact that we can't yet grow the great majority of microorganisms in the laboratory, so have been unaware of them until quite recently.”

Dr Donovan Parks, the lead software developer on the project, is excited about the recent advancement of genome sequencing technology, and how it's helping reconstruct the bacterial tree of life.

“It's developed to a remarkable degree, and we can now get the entire genetic blueprints of hundreds of thousands of bacteria, including bacteria that have not yet been grown in the lab,” he said.

The research team then used these genomic blueprints to construct a giant evolutionary tree of bacteria based on 120 genes that are highly conserved across the bacterial domain.

“This tree helped us create a standardised model, where we fixed all of the misclassifications and made the evolutionary timelines between bacterial groups consistent,” Dr Parks said.

“For example, the genus Clostridium has been a dumping ground for rod-shaped bacteria that produce spores inside their cells, so we reclassified this group into 121 separate genus groups across 29 different families.

“We've given bacterial classification a complete makeover, and we're delighted that the scientific community is just as excited about this as we are.”

The research teams' taxonomy is on the Genome Taxonomy Database, at gtdb.ecogenomic.org, which has been funded by an Australian Research Council Laureate Fellowship.