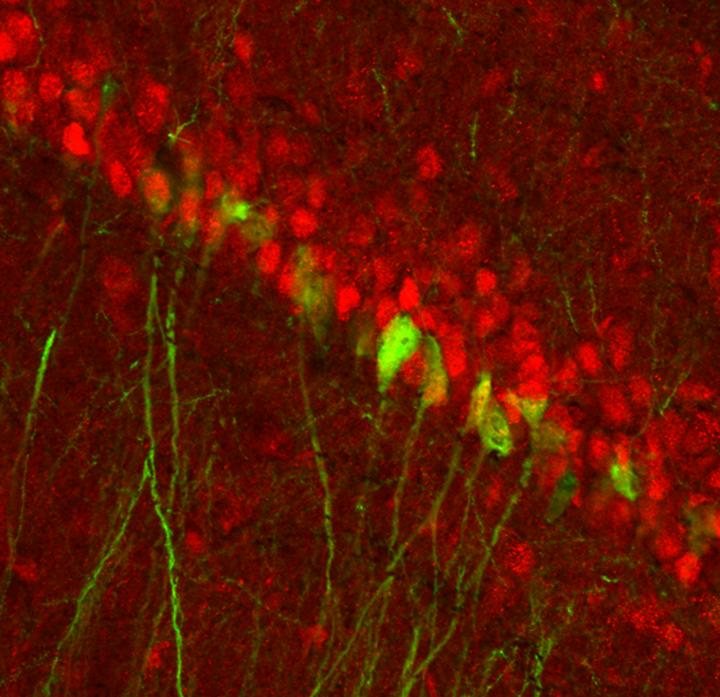 MSU researchers have found a gender-distinct circuit for depression that activates during stress and is controlled by testosterone. Credit: MSU

Michigan State University researchers, however, have found and flipped a switch in the brain, revealing a single circuit in mice that activates during stress and is controlled by testosterone.

The results, published in Biological Psychiatry, focus on the activity between neurons in the ventral hippocampus, which become active under stress and emotion, and their activation of nucleus accumbens neurons, critical players in reward and motivation.

“What makes these findings stand out is not only identifying this new circuit,” said A.J. Robison, MSU physiologist and lead author of the study, “but also observing and confirming how it drives different behaviors in males and females.”

To help close this void, Robison and a team of MSU scientists focused on this hippocampus-accumbens circuit and saw that the activity in male brains during stress was significantly lower than in females, and this required testosterone. When they removed testosterone, however, the male mice began expressing depression-like behaviors.

Conversely, the team observed increased circuit activity in female brains, but when testosterone was introduced, the neurons quieted, and the female mice became resistant to the depression-like behaviors.

“Even with our best antidepressants, such as Prozac, we don't know exactly how they work,” Robison said. “This is the first time we've found a circuit that drives this sexually different behavior; other scientists can now explore how this could translate to identifying new therapeutic targets in humans.”

Robison's group used chemogenetic tools to manipulate specific circuit activity in the mouse brain in this study. Such tools may inform the development of “genetic medicine” for the treatment of human diseases in the future.

(Note for media: Please include a link to the original paper in online coverage: https://www.biologicalpsychiatryjournal.com/article/S0006-3223(19)31618-X/pdf)

Michigan State University has been working to advance the common good in uncommon ways for 160 years. One of the top research universities in the world, MSU focuses its vast resources on creating solutions to some of the world's most pressing challenges, while providing life-changing opportunities to a diverse and inclusive academic community through more than 200 programs of study in 17 degree-granting colleges.