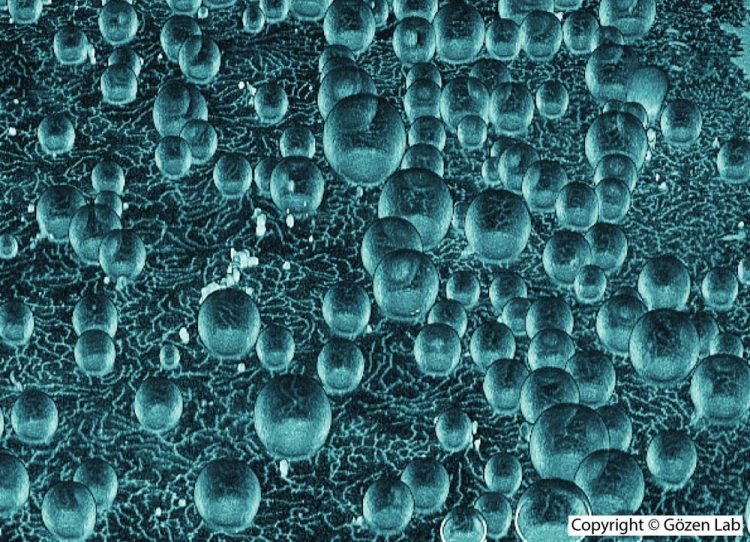 Spontaneously formed protocells, which resemble balloons anchored to a surface by a network of ropes, are visualized by 3D confocal microscopy. Credit: Irep Gözen

New research by Irep Gözen, Elif Koksal, and colleagues at the University of Oslo reveals, for the first time, how these vesicles can self-assemble on surfaces without external input.

The team discovered the most straight-forward and plausible explanation so far with the simplest assumptions. They will present their research at the 63rd Biophysical Society Annual Meeting, to be held March 2 – 6, 2019 in Baltimore, Maryland.

Gözen's lab was originally focused on biomaterials, not origins of life research.

“We were actually trying to do another experiment and this came as a discovery,” said Gözen. “The formation of lipid tubes and the emergence of thousands of vesicles was happening spontaneously when we left lipids on a silicon dioxide surface.”

The lipids in their experiment were similar to those in bacteria membranes and have water-loving heads and water-avoiding tails. Because of these water-preferring properties, they spontaneously organize with their tails facing inward and their heads facing out.

On the silicon dioxide surface, the lipids became sheets, with layers of these organized lipids. Due to the stickiness of the surface, at some points the two layers separate, and the top layer bulges out, creating tubes and then round balls as they gain more lipids.

The entire process is fully autonomous. A gentle flow from the movement of liquid can then cause these vesicles to detach from the surface creating protocells, like those believed to be a stepping-stone to the origin of life.

“This is a new and novel means of compartmentalization,” Gözen said.

It is conceivable that something similar happened on early earth. Silicone dioxide, or silica, is one of the most abundant minerals on the earth's surface. Fatty molecules could have easily existed in the previological era, as confirmed by the results of their successful synthesis performed in possible primitive Earth conditions, together with their traces found in fossils and meteorites. Intriguingly, silicon dioxide was recently detected on Mars by the Curiosity Rover.

Another puzzle in life's beginnings is how genetic material got inside of protocells. It is not known whether the compartments formed around the already-existing lengthy genetic chains such as RNA, or if the small building blocks somehow found their way inside these tiny bubbles and made the chains inside.

Gözen and colleagues added a light-emitting organic molecule similar in size to nucleotides, the genetic building blocks, to the surrounding of the bubbles. Such molecules which were too big to diffuse through the wall of the bubble, could get inside without compromising the protocells. They speculate it gets through transient defects or pores in the protocell wall.

“Our research may explain, for the first time, the details of self-directed transition from weakly organized lipids on solid surfaces to protocells with secluded internal contents,” Gözen said.

The Biophysical Society, founded in 1958, is a professional, scientific Society established to encourage development and dissemination of knowledge in biophysics. The Society promotes growth in this expanding field through its annual meeting, monthly journal, and committee and outreach activities. Its 9,000 members are located throughout the U.S. and the world, where they teach and conduct research in colleges, universities, laboratories and government agencies. http://www.biophysics.org.