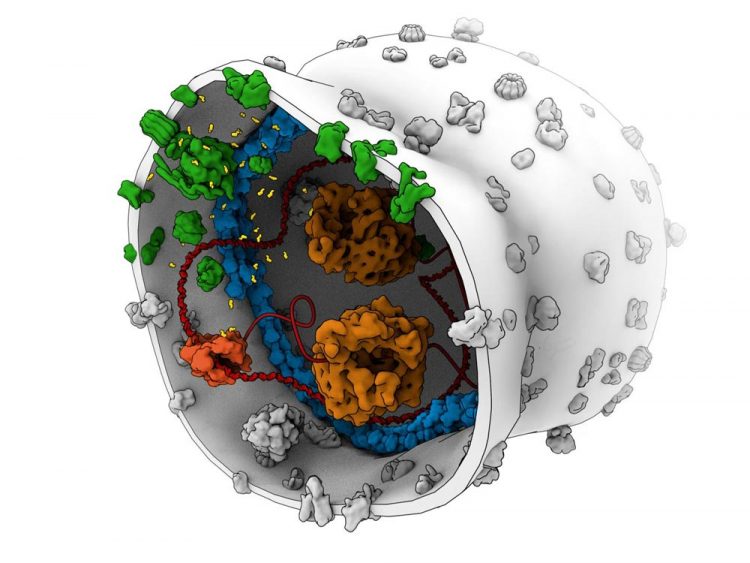 This is an artist's impression of a synthetic cell, with the ATP production system in green. Credit: Bert Poolman / BaSyC consortium

'Our aim is the bottom-up construction of a synthetic cell that can sustain itself and that can grow and divide,' explains University of Groningen Professor of Biochemistry Bert Poolman. He is part of a Dutch consortium that obtained a Gravitation grant in 2017 from the Netherlands Organisation for Scientific Research to realize this ambition. Different groups of scientists are producing different modules for the cell and Poolman's group was tasked with energy production.

All living cells produce ATP as an energy carrier but achieving sustainable production of ATP in a test tube is not a small task. 'In known synthetic systems, all components for the reaction were included inside a vesicle. However, after about half an hour, the reaction reached equilibrium and ATP production declined,' Poolman explains. 'We wanted our system to stay away from equilibrium, just like in living systems.'

It took three Ph.D. students in his group nearly four years to construct such a system. A lipid vesicle was fitted out with a transport protein that could import the substrate arginine and export the product ornithine. Inside the vesicle, enzymes were present that broke down the arginine into ornithine.

The free energy that this reaction provided was used to link phosphate to ADP, forming ATP. Ammonium and carbon dioxide were produced as waste products that diffused through the membrane. 'The export of ornithine produced inside the vesicle drives the import of arginine, which keeps the system running for as long as the vesicles are provided with arginine,' explains Poolman.

The system was left to run for 16 hours in the longest experiment that the scientists have performed. 'This is quite long – some bacteria can divide after just 20 minutes,' says Poolman. 'The current system should suffice for a synthetic cell that divides once every few hours.' Eventually, different modules like this one will be combined to create a synthetic cell that will function autonomously by synthesizing its own proteins from a synthetic genome.

The current system is based on biochemical components. However, Poolman's colleagues at Wageningen University & Research are busy collecting the genes needed for the production of enzymes used by the system and incorporating them into an artificial chromosome. Others are working on lipid and protein synthesis, for example, or cell division. The final synthetic cell should contain DNA for all these modules and operate them autonomously like a living cell, but in this case, engineered from the bottom-up and including new properties. However, this is many years away. 'In the meantime, we are already using our ATP-producing system to study ATP-dependent processes and advance the field of membrane transport,' says Poolman.