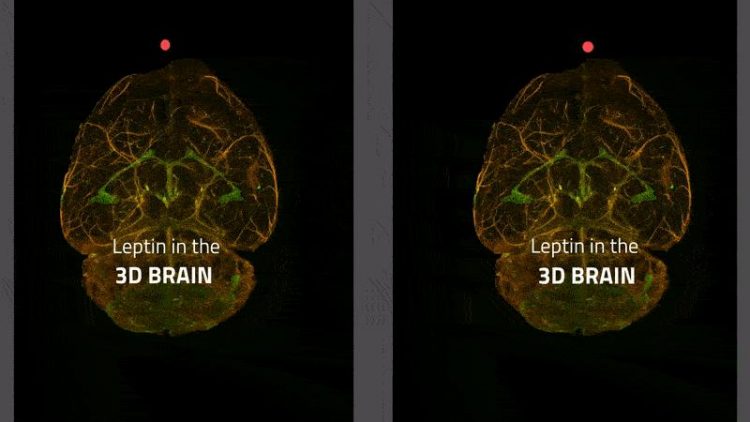 Leptin is an important satiety hormone that is produced by adipose tissue. The more fat there is in the body, the more leptin is released into the bloodstream. The hormone then crosses the blood-brain barrier to reach the brain’s satiety centers. There, it activates leptin receptors in nerve cells.

The receptors, in turn, send signals to the brain to stop food intake. However, if the hormone no longer elicits a response in the satiety centers, this condition is called Leptin resistance. Affected people are always hungry, as if their fat stores were not already full. Leptin resistance is a major cause of overweight and obesity.

“In obese mice and humans, leptin is released from fatty tissue into the bloodstream in high concentrations but fails to activate the satiety centers in the brain. It has long been assumed that leptin resistance is caused by a disrupted transport process,” explains Luke Harrison, a doctoral student at Helmholtz Zentrum München and lead author of the study.

As the ability of leptin to cross the blood-brain barrier is limited, so the theory goes, less of it reaches the satiety centers. “Our innovative 3D technique enabled us to visualize the transport of leptin for the first time and to investigate whether this theory holds up,” says the scientist.

Working with biologists, pathologists and structural biologists, Harrison was able to disprove this assumption. Thanks to the new imaging method, the research team headed by Dr. Paul Pfluger, a partner in the German Center for Diabetes Research (DZD), showed that leptin reaches the brain in sufficient quantities both in thin and in obese mice. The cause of the eating disorder must therefore lie in the nerve cells themselves.

“We can now narrow down the cause of leptin resistance and focus our research on the molecular mechanisms within nerve cells,” says Dr. Paul Pfluger. “Once all the processes involved in our satiety behavior have been elucidated, we will be able to develop new therapies for obesity and help overweight individuals lose weight.” The recent work with the mouse model is a significant advance in this direction, the biologist explains. “Restoring the body's response to leptin is an important step for obese patients in their efforts to regulate their food intake.”

In fact, his research team has recently shown that the substance Celastrol, which is also used in traditional Chinese medicine, restores leptin sensitivity and lowers body weight. Initial approaches are now underway, and research at Helmholtz Zentrum München will be further intensified. These efforts have received fresh impetus from the recent founding of the Helmholtz Institute for Metabolic, Obesity and Vascular Research (HI-MAG) in Leipzig, the only facility in Germany for carrying out clinical trials on leptin replacement therapy in humans.

The transport of leptin (labeled with a green fluorescent dye) from blood vessels (stained red) to brain tissue in a mouse. Leptin remaining in the blood vessels appears yellow. Leptin is primarily transported via the choroid plexus (bright green), where it is distributed via the cerebral fluid in the brain.

2) Experienced users should then be able to view the central 3D video by crossing their eyes. It can also help to focus on the two red dots until they overlap and merge into a third, central dot.

3) Less experienced users can bring their face up close to the monitor and focus on the left-hand image (or dot) with their left eye and on the right-hand image (or dot) with their right eye. If you maintain this focus and then move your head back from the monitor, you should be able to see a third video in 3D in the center, between the two video images on either side.

The Research Unit NeuroBiology of Diabetes (NBD) at Helmholtz Zentrum München studies the role of the central nervous system (CNS) as potential common denominator for obesity and diabetes type 2. NBD, which is associated with the IDO and part of the HDC and DZD, aims to understand the exact molecular underpinnings for leptin resistance and weight cycling and our adaptive physiological response to changes in the environment. http://www.helmholtz-muenchen.de/nbd

The German Center for Diabetes Research (DZD) is a national association that brings together experts in the field of diabetes research and combines basic research, translational research, epidemiology and clinical applications. The aim is to develop novel strategies for personalized prevention and treatment of diabetes. Members are Helmholtz Zentrum München – German Research Center for Environmental Health, the German Diabetes Center in Düsseldorf, the German Institute of Human Nutrition in Potsdam-Rehbrücke, the Paul Langerhans Institute Dresden of the Helmholtz Zentrum München at the University Medical Center Carl Gustav Carus of the TU Dresden and the Institute for Diabetes Research and Metabolic Diseases of the Helmholtz Zentrum München at the Eberhard-Karls-University of Tuebingen together with associated partners at the Universities in Heidelberg, Cologne, Leipzig, Lübeck and Munich. http://www.dzd-ev.de/en/index.html