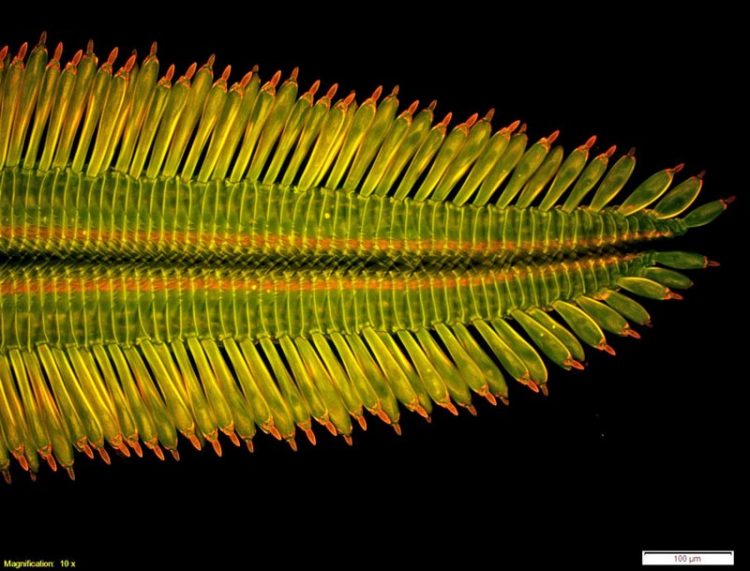 A high-speed camera was used to record proboscis-coiling configurations and the videos were then analyzed to isolate the frame that showed closeness to the Golden Ratio spiral. Credit: M. Lehnert

Alongside Leonardo Da Vinci's Vitruvian Man, disc-shaped galaxies, or the cochlea of the human ear, scientists can now count sap-feeding butterfly proboscises as aligned with the Golden Ratio.

The mysterious Golden Ratio (also known as Phi (φ), the Golden Mean, or the Divine Number) is an incommensurable number – a relationship between two irrational numbers – which occurs organically throughout the universe. Beginning as 1.61803, the Golden Ratio continues forever without repeating, similar to Pi (π). Artists and architects have employed the number to guide design. In the natural world, the Golden Ratio often appears in the shape of a spiral.

Researchers at Kent State University observed that the coiling action of the butterfly proboscis, a tube-like “mouth” that many butterflies and moths use to feed on fluids, resembled a spiral similar to that of the Golden Ratio, and decided to investigate. Their study, “The Golden Ratio reveals geometric differences in proboscis coiling among butterflies of different feeding habits”, was released by American Entomologist, a publication of the Entomological Society of America.

The experiment consisted of collecting six butterfly species with different feeding habits (nectar feeders, sap feeders, and puddle feeders, i.e., species where males puddle to acquire sodium) over a 3-month period near Alliance, OH. A high-speed camera was used to record proboscis-coiling configurations and the videos were then analyzed to isolate the frame that showed closeness to the Golden Ratio spiral.

Though proboscis geometry did not show a trend that matched the evolutionary relationships among the studied species, it was discovered that the Golden Ratio did relate to butterfly feeding habits, and sap-feeding butterflies have proboscis conformations that closely resemble the Golden Ratio. The researchers suggest that the differences in proboscis coiling conformations might relate to the substrates from which butterflies feed. “This trend fits a pattern where nectar feeders primarily feed on fluids confined in floral tubes, sap feeders feed on exposed fluids of porous surfaces, and puddle feeders feed from both.”

The researchers suggest that these findings can be used to predict the feeding habits of unstudied lepidopteran species, as well as provide the basis for further research on the connection between the structural configuration of proboscis coiling patterns and butterfly feeding habits. “Although coincidental, it is fascinating that a mathematical occurrence can be used to reveal a widespread pattern at radically different scales, from galaxies to butterfly proboscises,” concludes lead author Matthew S. Lehnert.

Matthew S. Lehnert is an Assistant Professor in the Department of Biological Sciences at Kent State University at Stark where he teaches Entomology, Genetics, and Evolution courses. He studies the evolutionary ecology and fluid uptake mechanisms of Lepidoptera.

Eric Brown was an undergraduate student at Kent State University at Stark where he recently graduated with a B.A. in Biology.

Margie P. Lehnert is a Lecturer in the Department of Biological Sciences at Kent State University at Stark where she teaches numerous biology courses for majors and non-majors.

Patrick D. Gerard is Professor of Applied Statistics in the Department of Mathematical Sciences at Clemson University.

Huan Yan is a Ph.D. Candidate at the Liquid Crystal Institute at Kent State University.

Chanjoong Kim is an Assistant Professor at the Liquid Crystal Institute at Kent State University.

American Entomologist is a quarterly magazine that publishes articles and information of general entomological interest. The magazine publishes columns, features, research, book reviews, letters to the editor, and obituaries.

**Link will be live upon embargo date. A full PDF of the article is available upon request.**