Salamanders chew with their palate 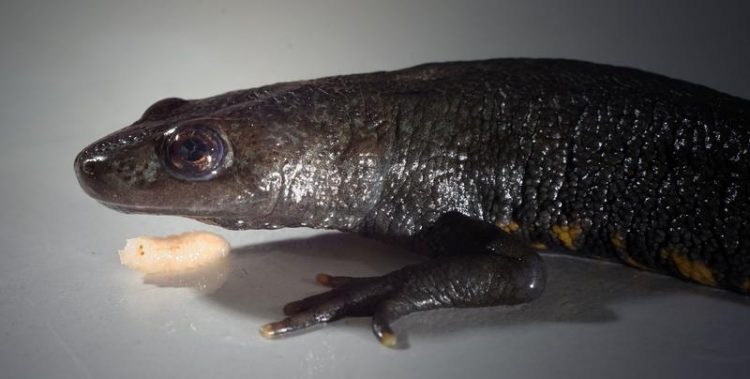 When the Italian Crested Newt (Triturus carnifex) eats the grub, it chews it with its palatal teeth. (Image: Jan-Peter Kasper/FSU)

The Italian Crested Newt – ‘Triturus carnifex’ – eats anything and everything it can overpower. Earthworms, mosquito larvae and water fleas are on its menu, but also snails, small fish and even its own offspring. A research team led by Dr Egon Heiss of Friedrich Schiller University in Jena (Germany) has studied the newt’s chewing behaviour and has made an astounding discovery.

‘Triturus carnifex’ is an amphibian of the order Caudata and is a true salamander. “According to the textbooks, amphibians swallow their prey whole, but we have been able to refute this,” says Heiss.

Together with doctoral student Daniel Schwarz and Dr Nicolai Konow of the University of Massachusetts, Heiss has succeeded in proving that the crested newts do actually chew their prey, but in a way that is different from that of most other land-based vertebrates. The researchers have now presented their findings in the specialist publication ‘Journal of Experimental Biology’ (doi:10.1242/jeb.189886).

“This newt uses what are called its palatal teeth to kill its prey and also to break it up,” explains Heiss. This means that the jaw teeth are mainly used to catch or hold the prey. With the help of the tongue, the prey is then rubbed rhythmically against the palate. The palate is equipped with very sharp teeth, around 0.5 to one millimetre long, which are constantly replaced by new teeth. These teeth can, for example, tear open the extremely tough cuticula of fly maggots.

“This kills the prey and, at the same time, helps the digestive secretions to take effect,” says Heiss. For the newt, this is also a form of life insurance: some insect larvae have such a strong bite that they would be able to bore through the predator’s body. The first impetus for the surprising research result came on a research visit to Antwerp (Belgium), when Nicolai Konow and Egon Heiss observed a newt feeding.

The biologists were intrigued by the amphibian’s head, jaw and tongue movements after it had seized its prey. “The newt actually appeared to be chewing,” says Heiss. The researchers were able to obtain a clear idea of what was happening with the help of the X-ray video unit at the Institute of Zoology and Evolutionary Research of the University of Jena.

The newt’s chewing behaviour prompts the question of how it can be explained in the context of evolution. “We can assume that real palatal teeth were present in early land vertebrates, and we suspect that the ‘tongue against palate’ chewing mechanism, as seen in newts, is something that goes back to the early days of land-based vertebrates,” says Heiss. Very similar chewing mechanisms can indeed be found in ancient mammals such as the echidna and the duckbilled platypus, but also in the manatee. Although in these animals the palatal teeth have been replaced by rough keratin structures, the creatures still rub their food against the palate.

The tongue originated when vertebrates came onto land

From the point of view of evolution, the move from water to land brought about change in animals’ chewing apparatus. A key role is played by the tongue, which only developed after vertebrates left the water. It is crucial for enabling chewing, as it moves food to the right place in the mouth. “With fish, the water current helps to do this,” explains Heiss. A similar change occurs in amphibian larvae; during metamorphosis, the gills of amphibians transform into a tongue when the larvae leave the water.

The findings now presented are the first results from the research project ‘Form, Function and Evolution of Food Manipulation in Urodela’, which is funded by the German Research Foundation (DFG) and was launched at the beginning of 2017. The project runs until the end of 2019 and maybe during that time, ‘Triturus carnifex’ will be persuaded to reveal more secrets.