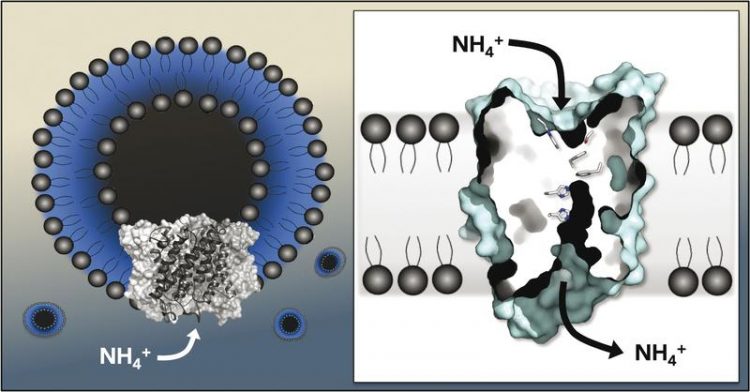 Proteins of the Amt family transport ammonium across the lipid membrane of the cell (Quelle. Susana Andrade)

Do they carry the gas ammonia or the ammonium ion in their luggage? And is transport active or passive?

Biochemists have long speculate on the mechanistic details of the ammonium transport family of proteins (Amt), which include the Rhesus protein factors, known as the mammalian blood group system.

What was previously known is that Amt proteins extend across cellular membranes where they specifically transport the nitrogen into bacteria and plant cells, essential nutrient for their growth and survival. In mammals, Rhesus proteins regulate acid and ion balance in kidney and liver cells.

A team of scientists led by Prof. Dr. Susana Andrade from the Institute of Biochemistry of the University of Freiburg and the Cluster of Excellence BIOSS Centre for Biological Signalling Studies has now determined the transport properties of Amt proteins with great precision on the basis of electrophysiology tests on artificial lipid systems.

The scientists cloned the membrane proteins from an archaea, a microorganisms that lives under extreme temperature conditions and isolate them. In 2005, the Freiburg researchers already threw light on the crystalline three-dimensional structure of a protein of this kind.

Now they have added the protein to a layer of lipid molecules, enabling them to measure the ion currents directly. The team discovered that a positive charge travels through the membrane: The membrane proteins do not transport the gas ammonia NH3 but rather the ammonium ion NH4+. The researchers published their findings in the journal Proceedings of the National Academy of Sciences of the USA.

The researchers tested three Amt proteins that are present in the bacteria and also determined the speed with which they allow ammonium to pass through the membrane. “In the future, we want to modify individual components of the transporter to improve our understanding of the exact molecular details involved” explains Andrade.

The scientific debate on Amt/Rh proteins stems from the difficulty of distinguishing between ammonia and ammonium in measurements, as the two molecules are transformed into each other in a continuous state of balance with protons. “Our in vitro method gives us a level of precision that finally allows us to draw valid conclusions concerning the transport process,” stresses the researcher.