Residues in fingerprints hold clues to their age 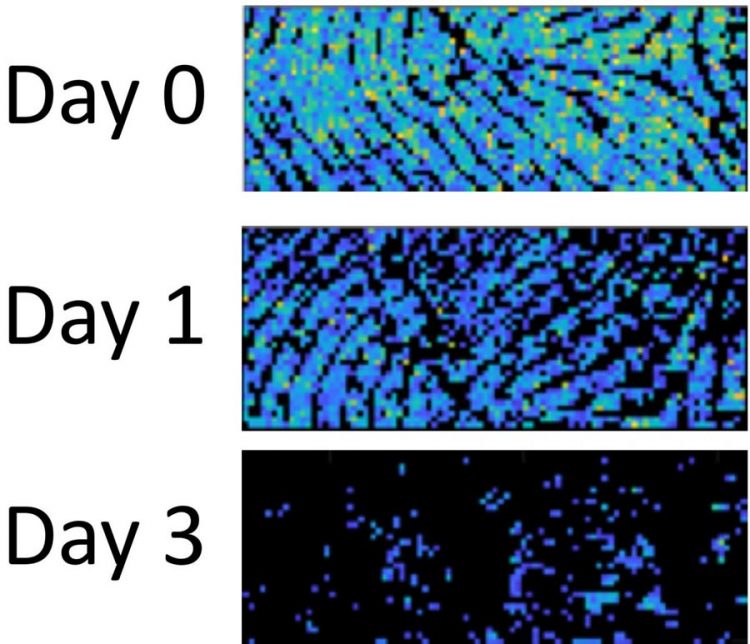 Levels of an unsaturated triacylglycerol decline in fingerprints from an individual from day 0 (top) to day 1 (middle) and day 3 (bottom). Credit: Adapted from Analytical Chemistry 2020, DOI: 10.1021/acs.analchem.9b04765

By determining the age of fingerprints, police could get an idea of who might have been present around the time a crime was committed. This information could, for example, contradict a suspect's explanation that he or she had visited earlier.

Scientists have already begun mining fingerprint residues for clues to the identity of the person who made them, but timing has proven more difficult to reliably pin down.

Notably, past research has shown that a gas chromatography-mass spectrometry method succeeded in determining if prints were more or less than eight days old; however, investigators often need more precision.

To get a better idea of when prints were deposited, Young Jin Lee and colleagues looked to reactions already suspected to take place in these residues, when ozone in air reacts with unsaturated triacylglycerols left by a fingertip.

Using prints collected from three donors, the researchers tracked shifting levels of triacylglycerols using mass spectrometry imaging, a technique that leaves the evidence intact. They found they could reliably determine the triacylglycerol degradation rate for each person over the course of seven days.

But the rate differed among individuals, with one person's triacylglycerols declining more gradually than the others. The researchers attribute this difference to higher levels of lipids in that individual's fingerprints.

The method also worked on residues that had been dusted with forensic powder. The researchers say that although a large-scale study is needed to better understand how lipid levels affect triacylglycerol degradation, this analysis is a first step toward developing a better fingerprint aging test.

The authors acknowledge funding from the National Institute of Justice.

The abstract that accompanies this study is available here.

For more research news, journalists and public information officers are encouraged to apply for complimentary press registration for the ACS Spring 2020 National Meeting & Exposition in Philadelphia.

The American Chemical Society (ACS) is a nonprofit organization chartered by the U.S. Congress. ACS' mission is to advance the broader chemistry enterprise and its practitioners for the benefit of Earth and its people. The Society is a global leader in providing access to chemistry-related information and research through its multiple research solutions, peer-reviewed journals, scientific conferences, eBooks and weekly news periodical Chemical & Engineering News. ACS journals are among the most cited, most trusted and most read within the scientific literature; however, ACS itself does not conduct chemical research. As a specialist in scientific information solutions (including SciFinder® and STN®), its CAS division powers global research, discovery and innovation. ACS' main offices are in Washington, D.C., and Columbus, Ohio.