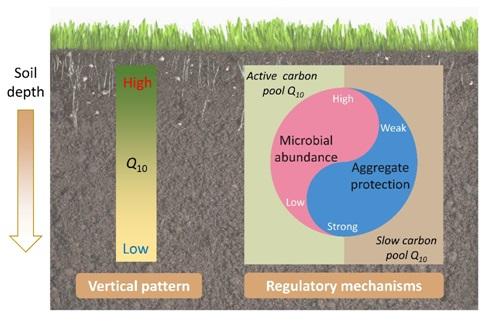 The regulatory mechanisms involved in the temperature sensitivity of SOM decomposition has been a topic of great interest among the global change research community over the last 20 years. However, comprehensive analyses involving the roles of substrate, environment and microbial properties in regulating Q10 have been limited.

Recently, a research team led by Prof. YANG Yuanhe from the Institute of Botany of the Chinese Academy of Sciences elucidated the mechanisms underlying vertical variations in Q10.

Based on the natural gradient of soil profile in Tibetan alpine grasslands, the team collected soil samples at two soil depths and then conducted long-term incubation, SOM decomposition modeling and manipulative experiments.

These results revealed the crucial role of soil carbon stabilization mechanisms in regulating the temperature response of SOM decomposition, and provided important insights for accurately understanding the feedback between the terrestrial carbon cycle and climate warming.