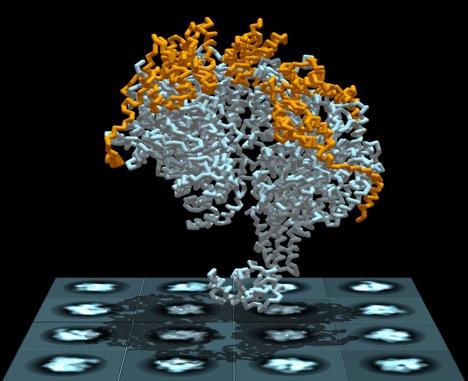 Loader proteins (orange) attach to the DnaB replicative helicase (white), causing it to briefly spiral open. Opening of the helicase enables entry of one of the DNA molecule's two strands. Once activated, the helicase runs the length of the strand, separating them and initiating the replication process. Here, the helicase -- helicase loader complex is shown atop a set of cryogenic electron microscopy images used to visualize the structure. Credit: Jillian Chase and David Jeruzalmi Usage Restrictions: Use only conjunction with this study

DNA replication is a complex process in which a helicase ring separates the DNA molecule's two entwined and encoded strands, allowing each to precisely reproduce its missing half.

Until recently, however, researchers have not understood how the helicase–a donut-shaped enzyme composed of six identical proteins–is able to thread just one of the strands when they are bound together.

Now, new research from scientists at The Graduate Center of The City University of New York, its Advanced Science Research Center (ASRC), and The City College of New York (CCNY) has solved the mystery.

In a paper published in today's issue of the journal eLife, researchers explain how the helicase loader protein (P loader) from a bacterial virus attaches to the replicative helicase causing it to spiral open and quickly reclose around one of the DNA strands.

The helicase then begins running along the strand and breaking the hydrogen bounds that bind it to the second strand, allowing each to become a substrate that can replicate a complete DNA molecule.

“Going into this research, we knew there had to be a loader protein for this action to take place, but we didn't know what the process looked like,” said lead investigator David Jeruzalmi, a professor of chemistry and biochemistry at The Graduate Center and CCNY.

“Through our research we were able to identify the mechanism for loading the DNA strand into the helicase, and we also learned that the loader proteins prevent any movement of the helicase at the moment it opens and closes in order to prevent any replication mistakes.”

The researchers studied E. coli bacteria DNA to sort out the replication mechanism. They employed cryo electron microscopy and tomography to image the helicase and all of its loader proteins. In addition to helping them identify a previously unknown mechanism in the DNA replication process, the research might also point to an avenue for a novel class of antibiotics that target the bacterial DNA replication machinery, said the researchers.

“Our research is a beautiful example of the powerful ability of cryo-electron microscopy to provide important findings that can be used to develop new therapeutic drugs,” said co-investigator Amedee des Georges, professor of chemistry and biochemistry at The Graduate Center and CCNY and a member of the ASRC's Structural Biology Initiative.

The Graduate Center of The City University of New York (CUNY) is a leader in public graduate education devoted to enhancing the public good through pioneering research, serious learning, and reasoned debate. The Graduate Center offers ambitious students more than 40 doctoral and master's programs of the highest caliber, taught by top faculty from throughout CUNY — the nation's largest public urban university. Through its nearly 40 centers, institutes, and initiatives, including its Advanced Science Research Center (ASRC), The Graduate Center influences public policy and discourse and shapes innovation. The Graduate Center's extensive public programs make it a home for culture and conversation.