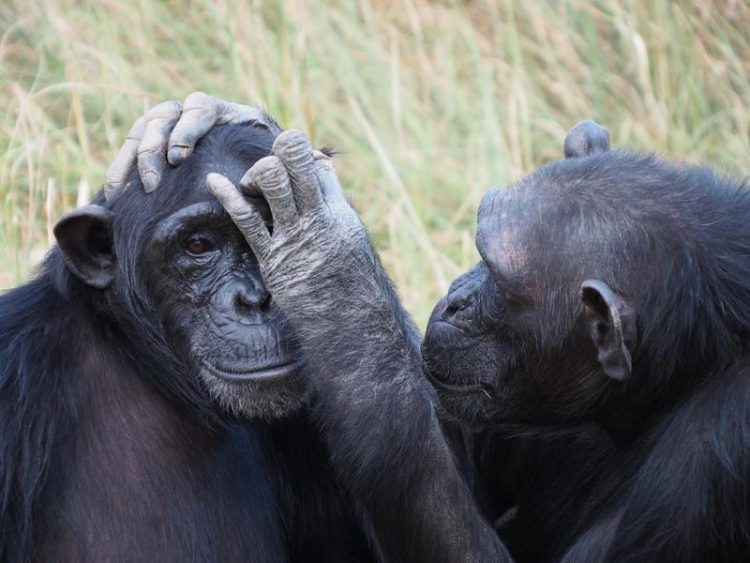 An international team of scientists including members of the Leipzig Research Center of Early Child Development (LFE) have been studying four groups of chimpanzees at the Chimfunshi wildlife orphanage in northern Zambia over the course of three years.

Two of the groups had significantly larger party sizes than the other two groups. “The most gregarious group was also more social in the other aspects we measured”, says senior author and LFE-director Daniel Haun, “the chimpanzees in this group were closer to each other and also groomed each other much more often than the other groups.”

“The set-up of this sanctuary provides us with a unique opportunity to study the origins of chimpanzee culture”, says Sarah DeTroy, a researcher at Chimfunshi and LFE-member. “Usually researchers compare wild groups of chimpanzees that live in different environments and have large genetic differences and therefor can’t rule out the influence of these two factors in the observed differences.

Since the chimpanzees at Chimfunshi all share the same environment and there are no systematic genetic differences between the groups this lets researchers identify how other processes, such as social learning, might create unique chimpanzee cultures.”

“While we didn’t directly investigate the origins of these differences in this current study”, adds Prof Haun, “we know that chimpanzees are able to socially learn from each other and that primates can adapt their social behavior according to their context. The individuals in the respective groups may be observing interaction patterns such as general closeness and grooming frequency and socially learning them.”

The chimpanzee sanctuary, Chimfunshi, is home to over a hundred chimpanzees that have been rescued as well as their offspring. The research team has been working with the chimpanzees at Chimfunshi over the past 10 years studying various aspects of their behavior and cognition, such as their tendency to conform to others’ behavior, the creation and transmission of cultural “fads” and their grieving behavior. “We’ve observed a large variability in chimpanzee behavior over the years we’ve been at Chimfunshi”, says Prof. Haun, “this current study shows some of the extent and stability of differences in general sociability and provides a basis for understanding how these differences could influence other behaviors such as cooperation and prosociality.”