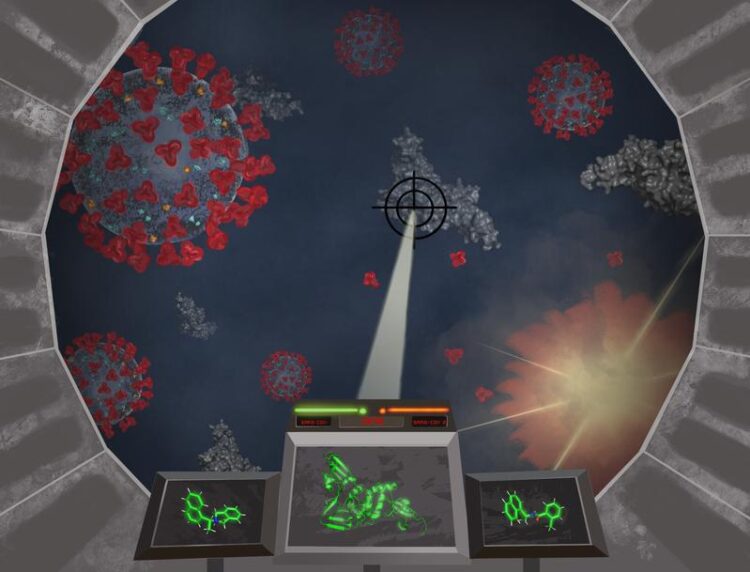 The cover of ChemMedChem provides a closer look at coronavirus particles and the virus' papain-like protease: The essential protease is targeted and attacked by novel inhibitors, leading to the eradication of the virus.
ill./©: Hannah Maus, Lea Maus

While the first vaccines have been developed against the pathogen SARS-CoV-2, studies are still underway to identify effective drugs for treating coronavirus infections. Scientists in Gießen, Mainz, and Würzburg in Germany involved in a fundamental research project have now identified potential starting points that could contribute to the development of drugs able to combat the pathogen responsible for the current COVID-19 pandemic as well as the coronaviruses in general. These include inhibitors that home in on a particular viral enzyme.

“The inhibitors attack this enzyme and render it inactive, meaning the virus can no longer proliferate,” explained principal investigator Professor Tanja Schirmeister of Johannes Gutenberg University Mainz (JGU). “Based on our findings, it may be possible to develop drugs that are not only effective against the current coronaviruses, but that will also be effective against any which emerge in the future.”

The team of researchers at the JGU Institute of Pharmaceutical and Biomedical Sciences led by Tanja Schirmeister first focused on the virus which caused the pandemic of 2002/2003, now known as SARS-CoV. At the time, they investigated two important viral enzymes and were able to develop an inhibitor for one of the two enzymes. They took the same approach in the current study. “As there are homologous enzymes present in SARS-CoV-2, we have tested our old inhibitors on these enzymes and on the virus itself,” said Schirmeister. These enzymes are proteases that the virus needs to reproduce. If these proteolytic enzymes are inhibited, the viruses can no longer replicate.

Discovering the structures of proteases and related structure-activity relationships

The first priority was uncovering the structure of the proteases. With the aid of computer programs, the researchers then identified drugs that would be suited to these structures. For this, the Mainz team collaborated with computer-aided drug design (CADD) experts led by Professor Christoph Sotriffer at Julius-Maximilians-Universität of Würzburg. The Mainz-based team then synthesized and tested promising candidates at JGU. “Potential inhibitors are first designed on the drawing board, then we determine how effective they are,” explained Schirmeister. Her group tested some 40 to 45 different compounds against SARS-CoV-2, including all the previous inhibitors that had already been used against SARS-CoV. “We also synthesized substances that we expected not to be effective. This enabled us to verify that the data provided by the computer models is valid.”

The tests were first undertaken using the target enzyme, which is the papain-like protease necessary for the viruses’ proliferation. However, a positive result does not necessarily mean that the inhibitor also stops the virus from reproducing. The next step was to use it against the virus itself. If this result is also positive, then it is necessary to evaluate the potential toxicity of the agent to ensure that cells infected by the virus are not impaired.

In addition to the medicinal chemistry teams in Mainz and Würzburg, the multi-stage process also involved virologists led by Professor John Ziebuhr of Justus Liebig University Giessen. The study shows that non-peptide molecules can inhibit the target enzymes and also have an antiviral effect. The research team also suspects that the inhibitors identified may have an even greater role to play. “They represent a starting point for further research into pan‐coronaviral inhibitors thanks to the similarity in the proteases of these viruses,” stated Tanja Schirmeister. “This means that it may lead to the discovery of broadly acting antivirals that are effective against previously known and newly emerging coronaviruses.” Thanks to their work, the results of which have been published in the journal ChemMedChem, the cooperation partners have also gained a deeper understanding of the mechanisms which bind the inhibitors to the enzymes.

Image:
http://download.uni-mainz.de/presse/09_pharmazie_hemmstoffe_sars_cov_2.jpg
The cover of ChemMedChem provides a closer look at coronavirus particles and the virus’ papain-like protease: The essential protease is targeted and attacked by novel inhibitors, leading to the eradication of the virus.
ill./©: Hannah Maus, Lea Maus