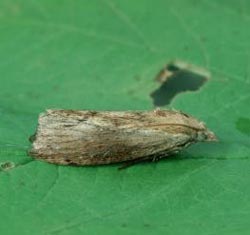 Humans are only capable of hearing sounds of 20kHz maximum, dropping to around 12-15kHz as we age, and even dolphins, known exponents of ultrasound, can't compete as their limitations are around 160kHz.

The research, conducted at the University's Centre for Ultrasonic Engineering, has identified the extraordinary sensory characteristics of the moth, paving the way for developments in air-couple ultrasound.

Dr James Windmill, who has led the research at Strathclyde, said: “We are extremely surprised to find that the moth is capable of hearing sound frequencies at this level and we hope to use the findings to better understand air-coupled ultrasound.”

“The use of ultrasound in air is extremely difficult as such high frequency signals are quickly weakened in air. Other animals such as bats are known to use ultrasound to communicate and now it is clear that moths are capable of even more advanced use of sound.

“It's not entirely clear how the moths have developed to be able to hear at such a high frequency, but it is possible that they have had to improve the communication between each other to avoid capture from their natural predator – the bat – which use similar sounds.”

The research findings will allow the Dr Windmill and his colleagues to further develop their understanding of ultrasound and how to transmit and receive ultrasonic pulses travelling in air.

With frequency sensitivity that is unparalleled in the animal kingdom, this moth is ready for any echolocation call adaptations made by the bat in the on-going bat–moth evolutionary war.

Dr Windmill's multi-disciplinary research team is now working to apply the biological study of this, and other insect ears to the design of micro-scale acoustic systems. It is hoped that by studying the unprecedented capabilities of the moth's ear, the team can produce new technological innovations, such as miniature microphones.