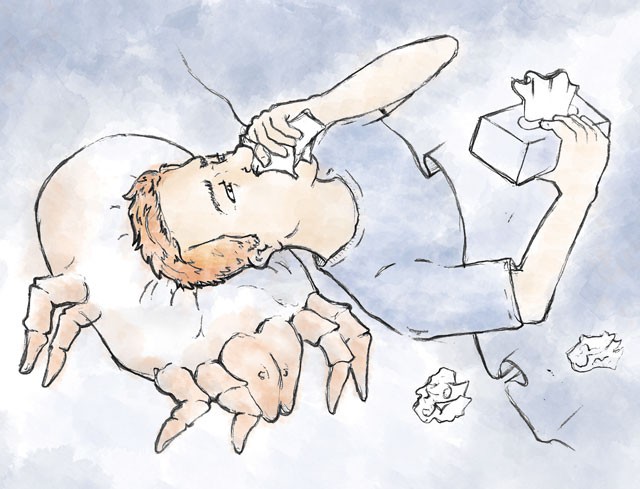 Dust mites are tiny and ubiquitous, but they cause big allergic reactions for many people. University of Iowa researchers have created a vaccine that may provide relief to dust-mite allergies. Illustration by Austin Smoldt-Sáenz.

If you’re allergic to dust mites (and chances are you are), help may be on the way.

Researchers at the University of Iowa have developed a vaccine that can combat dust-mite allergies by naturally switching the body’s immune response. In animal tests, the nano-sized vaccine package lowered lung inflammation by 83 percent despite repeated exposure to the allergens, according to the paper, published in the AAPS (American Association of Pharmaceutical Scientists) Journal. One big reason why it works, the researchers contend, is because the vaccine package contains a booster that alters the body’s inflammatory response to dust-mite allergens.

“What is new about this is we have developed a vaccine against dust-mite allergens that hasn’t been used before,” says Aliasger Salem, professor in pharmaceutical sciences at the UI and a corresponding author on the paper.

Dust mites are ubiquitous, microscopic buggers who burrow in mattresses, sofas, and other homey spots. They are found in 84 percent of households in the United States, according to a published, national survey. Preying on skin cells on the body, the mites trigger allergies and breathing difficulties among 45 percent of those who suffer from asthma, according to some studies. Prolonged exposure can cause lung damage.

Treatment is limited to getting temporary relief from inhalers or undergoing regular exposure to build up tolerance, which is long term and holds no guarantee of success.

“Our research explores a novel approach to treating mite allergy in which specially-encapsulated miniscule particles are administered with sequences of bacterial DNA that direct the immune system to suppress allergic immune responses,” says Peter Thorne, public health professor at the UI and a contributing author on the paper. “This work suggests a way forward to alleviate mite-induced asthma in allergy sufferers.”

The UI-developed vaccine takes advantage of the body’s natural inclination to defend itself against foreign bodies. A key to the formula lies in the use of an adjuvant—which boosts the potency of the vaccine—called CpG. The booster has been used successfully in cancer vaccines but never had been tested as a vaccine for dust-mite allergies. Put broadly, CpG sets off a fire alarm within the body, springing immune cells into action. Those immune cells absorb the CpG and dispose of it.

This is important, because as the immune cells absorb CpG, they’re also taking in the vaccine, which has been added to the package, much like your mother may have wrapped a bitter pill around something tasty to get you to swallow it. In another twist, combining the antigen (the vaccine) and CpG causes the body to change its immune response, producing antibodies that dampen the damaging health effects dust-mite allergens generally cause.

In lab tests, the CpG-antigen package, at 300 nanometers in size, was absorbed 90 percent of the time by immune cells, the UI-led team reports. The researchers followed up those experiments by giving the package to mice and exposing the animals to dust-mite allergens every other day for nine days total. In analyses conducted at the UI College of Public Health, packages with CpG yielded greater production of the desirable antibodies, while lung inflammation was lower than particles that did not contain CpG, the researchers report.

“This is exactly what we were hoping for,” says Salem, whose primary appointment is in the College of Pharmacy.

The researchers will continue to test the vaccine in the hope that it can eventually be used to treat patients.

The paper’s first author is Vijaya Joshi, a graduate fellow in pharmacy at the UI. Contributing authors, all from the UI, include Andrea Dodd, Xuefang Jing, Amaraporn Wongrakpanich and Katherine Gibson-Corley.