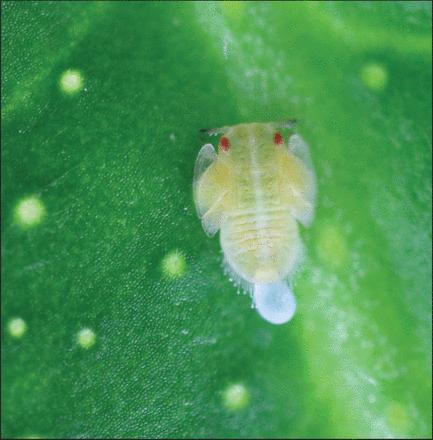 Citrus greening, also known as huanglongbing, is a serious disease dramatically affecting citrus production all over the world. Trees with this disease are unable to get enough nutrients from the soil, their leaves turn yellow, young twigs die back, and fruit remains small, green and unsuitable for sale. After only a few years the trees die completely.

These symptoms are associated with a bacterium called 'Candidatus Liberibacter asiaticus,' referred to as CLas for short, which is spread from tree to tree by its tiny insect vector, the Asian citrus psyllid (Diaphorina citri). Today, citrus greening has been detected in every citrus-producing county in Florida, throughout the southern citrus growing states and in isolated spots of southern California. Growers have tried many strategies to combat the disease, but none have been effective enough or long-lasting.

Researchers at Boyce Thompson Institute (BTI) and in Emerging Pests and Pathogens Research Laboratory at the USDA- Agricultural Research Service in Ithaca, NY, are among many investigators working to find a solution, and their recent publication sheds light on an important strategy for controlling the spread of CLas. Published in Infection and Immunity, they present a possible mechanism for how CLas can infect its psyllid vector.

The bacteria are sucked up when a psyllid feeds on an infected tree, replicate inside the insect, and then infect healthy trees as the psyllid feeds throughout a grove. Without hitching a ride in the insect, CLas would not be able to infect new trees, and thus no new trees would succumb to citrus greening disease. With the long-term goal to disrupt this interaction, researchers in the Heck lab have focused on an important point: not all psyllids are equal in their ability to spread CLas.

“Research has shown over and over that nymphs are able to acquire the bacteria from the plant much better than adults,” said Marina Mann, BTI researcher and first-author on the study. “Answering why is one of our next steps because it may give us a way to control the psyllid's ability to spread the bacteria.”

To effectively be spread by psyllids, CLas must pass through the cells lining the insect's gut. The lab, under the direction of BTI professor and ARS researcher Michelle Heck, has previously shown that the gut cells of adult ACP experience a severe stress response when infected by CLas. The cell nuclei become fragmented, and some cells will even undergo apoptosis – auto-induced cell suicide. In their recent publication, the researchers report a much different response in the young psyllid nymphs.

“When we looked at nymphs, we found that their nuclei rarely reached the same level of disruption we saw in adults, and thus appeared resistant to the effects of exposure to CLas,” said Mann.

The next step will be to identify the mechanism for resistance in the nymphs so that it might be reversed to halt the spread of CLas. An important clue lies in how psyllids interact with symbiotic bacteria in its gut, especially Wolbachia pipientis.

Many insects are hosts for Wolbachia, and often depend on these bacteria for important benefits – much like how human health depends on gut bacteria. In their study, Mann and Heck show that in psyllid nymphs, Wolbachia and CLas reside within the same cells. To accommodate the beneficial bacteria, the nymph gut cells may actively avoid cell suicide, which, the authors hypothesize, might help CLas get in and multiply at the same time.

Their theory is supported by their discovery that the levels of CLas in psyllid nymphs are strongly correlated with the levels of W. pipientis, meaning that the nymphs that let more Wolbachia in have also let in more CLas. Although this link remains to be tested directly, understanding its mechanism could yield an important target for disrupting the psyllid-CLas interaction.

“We now have a foothold in our understanding of a molecular difference between nymph and adult psyllids in their guts, which CLas exploits to gain entry into the insect vector,” said Heck, who is lead investigator for the project. “This is important to our ability to develop new ways to block transmission by insects in the grove.”

“Citrus growers will be in a much better situation in terms of disease control and saving the U.S. citrus industry,” said Dan Dreyer, Chairman of the California Citrus Research Board, which funds this and other research aimed at developing a management strategy for citrus greening.

“There are still many unanswered questions about CLas, how it is acquired and transmitted via the Asian citrus psyllid and how it causes the disease,” continued Dreyer. “The more we learn about CLas and its vector, the closer we will get to moving citrus production past the threat of citrus greening.”

About Boyce Thompson Institute: Boyce Thompson Institute is a premier life sciences research institution located in Ithaca, New York on the Cornell University campus. BTI scientists conduct investigations into fundamental plant and life sciences research with the goals of increasing food security, improving environmental sustainability in agriculture and making basic discoveries that will enhance human health. Throughout this work, BTI is committed to inspiring and educating students and to providing advanced training for the next generation of scientists. For more information, visit btiscience.org.