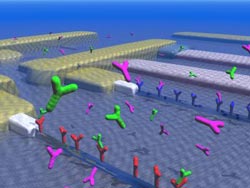 “We electronically plugged into the biochemical system of cells,” said senior author Mark Reed, Harold Hodgkinson Professor of Engineering & Applied Science. “These developments have profound implications both for application of nanoscience technologies and for the speed and sensitivity they bring to the future of diagnostics.”

An interdisciplinary team of engineers in the Yale Institute for Nanoscience and Quantum Engineering has overcome hurdles in NW synthesis by using a tried-and-true process of wet-etch lithography on commercially available silicon-on-insulator wafers. These NWs are structurally stable and demonstrate an unprecedented sensitivity as sensors for detection of antibodies and other biologically important molecules.

According to Reed, not only can the NWs detect extremely minute concentrations (as few as 1000 individual molecules in a cubic millimeter), they can do it without the hazard or inconvenience of any added fluorescent or radioactive detection probes.

The study demonstrated ability of the NWs to monitor antibody binding, and to sense real-time live cellular immune response using T-lymphocyte activation as a model. Within approximately 10 seconds, the NW could register T-cell activation as the release acid to the device. The basis for the sensors is the detection of hydrogen ions or acidity, within the physiological range of reactions in the body. Traditional assays for detection of immune system cells such as T cells or for antibodies usually take hours to complete.

“The ability to differentiate between immune system cells based on their function and with label-free reagents is key for rapid and reliable diagnostics as well as for advancing basic science,” said co-author Tarek Fahmy, assistant professor of biomedical engineering. “These nanosensors can replace current technology with a solid-state device and the results promise to radically change the way we assay for these cells.”

“The sensor is essentially on the size scale of the molecules it is designed to sense,” said lead author Eric Stern, a graduate student whose thesis work has focused on designing and building nanoscale chemical and biological sensors. His project was funded by the Department of Defense and placed high importance on the capability of detecting multiple molecules, including pathogens.

“You can think of the process of making the nanowires as sculpting. It can either be done by working down from the rock or up from the clay — we carved down from the rock,” said Fahmy. “Previous approaches used the equivalent of a hacksaw, we used a molecular chisel. We were able to make exactly what we wanted with the most traditional technology out there.”

According to Stern, “We not only got the high quality smooth surface we wanted, but we were also able to make them smaller than we originally defined. Using the robust 'old fashioned' technology of lithography gives us manufacturing uniformity.

The authors say that although this study focuses on device and sensor performance, the strength of the approach lies in seamless integration with CMOS technology, and the approach “appears to have potential for extension to a fully integrated system, with wide use as sensors in molecular and cellular arrays.”

“This project is a powerful demonstration of what we are trying to achieve in the Yale Institute of Nanoscience and Quantum Engineering,” said Paul Fleury, Dean of Engineering and Director of the Institute. “It was a remarkable collaboration, of biomedical, electrical and mechanical engineering with chemistry and applied physics, that worked for all of us. And a dedicated graduate student with a focused idea made it happen.”