Another nanobrick in the wall 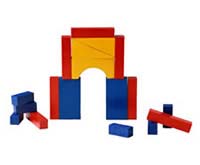 US researchers have made the world’s smallest building blocks. The nanocubes are just a millionth of a millimetre (a nanometre) across1. Stacked like bricks, they could make up a range of materials with useful properties such as light emission or electrical conduction.

Many chemists are currently trying to develop molecular-scale construction kits in which the individual components are single molecules to provide the polymers of the future. Conventional polymers are chainlike molecules. These entangle to form plastics ranging from soft polyethylene to hard polystyrene.

Chemists can exert some influence over the properties of the bulk plastic by altering the shape and composition of the molecular chains. But they have little control over how the chains weave together.

Richard Laine and colleagues at the University of Michigan in Ann Arbor want to replace chains with bricks. Their molecular units are silicon and oxygen atoms linked into a cube-shaped framework with a silicon at each corner.

The researchers connect the cubes by their corners – each corner silicon has a ’spare’ bond to which other chemical groups can be attached.

Similar materials have been prepared previously using corner linkers made from chainlike hydrocarbons. Like cubic octupi with eight arms, these are of limited practical value because they decompose quite easily when heated, and form messy glass-like solids instead of well-ordered crystals with the cubes stacked precisely.

For example, the nanocubes make a curable resin that can withstand heating above 500 oC in air. And by appending different molecular groups to the short benzene-like arms, the researchers have made a material that conducts electricity, which might be used in polymer-based light-emitting diodes for display devices. A third kind of cubic molecule emits green light and could be useful in sensors and displays.