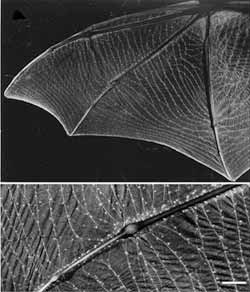 Bats have an “ear” for flying in the dark because of a remarkable auditory talent that allows them to determine their physical environment by listening to echoes. But an Ohio University neurobiology professor says bats have a “feel” for it, too.

John Zook’s studies of bat flight suggest that touch-sensitive receptors on bats’ wings help them maintain altitude and catch insects in midair. His preliminary findings, presented at the recent Society for Neuroscience meeting, revive part of a long-forgotten theory that bats use their sense of touch for nighttime navigation and hunting.

The theory that bats fly by feel was first proposed in the 1780s by French biologist Georges Cuvier, but faded in the 1930s when researchers discovered echolocation, a kind of biological sonar found in bats, dolphins and a few other animals. Bats use echolocation to identify and navigate their environment by emitting calls and listening to the echoes that return from various objects.

Touch receptors take the form of tiny bumps, or raised domes, along the surface of bats’ wings. The domes contain Merkel cells, a type of “touch” cell common in bumps on the skin of most mammals, including humans. Bat touch domes are different, however, because they feature a tiny hair poking out of the center.

When Zook recorded the electrical activity of the Merkel cells, he found they were sensitive to air flowing across the wing. These cells were most active when airflow – particularly turbulent airflow – stimulates the hair. When a bat’s wing isn’t properly angled or curved during flight, air passing next to the wing can become turbulent. Merkel cells help bats stay aerodynamically sound by alerting them when their wing position or curve is incorrect, preventing the creatures from stalling in midair.

“It’s like a sail or a plane. When you change the curve of a wing a little bit, you get improved lift. But if you curve it too much, the bat – or plane – may suddenly lose lift, hitting a stall point and falling out of the air. These receptor cells give bats constant feedback about their wing positions,” said Zook, who has studied bats for more than 30 years, focusing on echolocation and the bat auditory system. The bat’s sense of touch has been a side interest since the early 1980s.

To test his hypothesis, Zook removed the delicate hairs from bats’ wings with a hair removal cream. Then he let them fly. The bats appeared to fly normally when following a straight path, but when they’d try to take a sharp turn, such as at the corner of a room, they would drop or even jump in altitude, sometimes erratically. When the hairs grew back, the bats resumed making turns normally.

“It was obvious they had trouble maintaining elevation on a turn,” he said. “Without the hairs, the bats were increasing the curve of their wings too much or not enough.”

The bats’ flight behavior also changed based on the area of the wing where the hairs were removed. For example, when Zook removed hairs along the trailing edge of the wings and on the membrane between the legs, the bats were able to fly and turn effectively, but they tended to pitch forward because they couldn’t control their in-flight balance.

Zook’s research also points to the importance of a second type of receptor cell in the membranous part of bats’ wings. Nerve recordings revealed that these receptors respond when the membrane stretches. Zook calls areas on the wing where these stretch-sensitive cells overlap “sweet spots” because they are where bats like to snag their prey. In the lab, Zook shot mealworms covered with flour into the air and recorded how the bats caught them. He could tell from the flour imprints on the wings that the bats caught their prey almost exclusively in the stretch-sensitive sweet spots.