Scientists Discover How to Flip a Molecular Switch 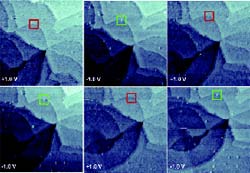 Credit: Lewis et al. <br>Sequential STM images of FAPPB/R1ATC9 obtained at alternating sample biases of +1.0 and -1.0 V. The majority of the FAPPB molecules (apparent protrusions, displayed as bright spots) switch conductance states between OFF at +1.0 V and ON at -1.0 V sample bias. The red and green boxes follow one FAPPB molecule that exhibits this bias dependence. Imaging conditions: 4000 ‰ × 4000 ‰, I = 2 pA.

A means for controlling single-molecule switches by engineering their design and surrounding environment has been developed by a research team led by scientists at Penn State, Rice University, and the University of Oregon. The research demonstrates that single-molecule switches can be tailored to respond in predictable and stable ways, depending on the direction of the electric field applied to them–while some switches were engineered to turn on, others were engineered to turn off in response to the same applied electric field. The discovery, which is an essential step in the emerging field of molecular electronics, could further the development of nano-components–as small as molecules or atoms–for use in future generations of computers and other electronic devices.

A paper describing the research results, titled “Molecular Engineering of the Polarity and Interactions of Molecular Electronic Switches,” will be published in the Journal of the American Chemical Society on 21 December 2005. “This research confirms our hypothesis of how single-molecule switches work,” says Penn State Professor of Chemistry and Physics Paul S. Weiss, whose lab tested the molecules. “Molecular switches eventually may become integrated into real electronics, but not until after someone discovers a way to wire them.” In addition to Weiss, the research team includes Penelopie Lewis of Penn State, who now is at Columbia University; James Tour and Francisco Maya at Rice University; and James Hutchison and Christina Inman at the University of Oregon.

The research is the latest achievement in the team’s ongoing studies of a family of stiff, stringy molecules known as as OPEs–oligo phenylene-ethynylenes–which the scientists have tailored in a number of ways to have a variety of physical, chemical, and electronic characteristics. The potential for using these OPE molecules as switches had been limited by their troublesome tendency to turn on and off at random, but Weiss and his colleagues recently discovered a way to reduce this random switching. In their current research, the scientists demonstrated, with a number of definitive experiments, how and why it is possible to control these molecular switches.

To study the properties of individual OPE molecules, the scientists first inserted them into a hairbrush-like matrix of similarly shaped molecules, which Weiss describes as a “self-assembled amide-containing alkanethiol monolayer.” One end of each molecular “bristle” is attached to the thin gold base of the microscopic hairbrush. With the individual OPE molecules surrounded by the matrix of alkanethiol molecules, all anchored in gold, Weiss and his team were able to study the properties of the OPE molecules with a powerful scanning tunneling microscope (STM). The molecules were synthesized in Tour’s lab at Rice University and the matrix was synthesized in Hutchinson’s lab at the University of Oregon.

The team synthesized a variety of OPE molecules, some with a large dipole–the difference in strength and polarity of the electric charge between one end of the molecule and the other–and others with a weaker dipole. Some of the OPE molecules were designed to have a positive charge on the end facing away from the gold base while others were designed to have a negative charge at that end. Weiss’s lab found that the tip of the microscope pulled an OPE molecule up higher than the surrounding matrix–or “on”–if the OPE molecule had a sufficiently strong dipole and if the charge of its exposed end was opposite that of the STM tip, making the two electrically attractive. “The OPEs that we engineered to have the strongest dipoles are the most reliable,” Weiss says.

The researchers also found that if the charge of the STM tip was the same as that on the end of an OPE, and therefore electrically repulsive, the molecule was pushed down–or “off”–causing it to lean sideways into the matrix. They discovered that this position alters the molecule’s interaction with the system’s gold base, changing the system’s electrical conductance. “When the molecule is tilted over, electrons have a harder time going through this bond, so the switch is more resistive,” Weiss explains.

The scientists also demonstrated that it is important to engineer the chemical environment, as well as the electronic environment, that surrounds the OPE molecule. “We repositioned a nitro group attached on the side of one of the varieties of OPE switches so it had a strong-enough dipole and could interact with the amide groups on the surrounding matrix molecules through hydrogen bonding,” Weiss says. The team also redesigned the matrix so it would be able to interact better with the new functionality of this repositioned group. The team’s studies show that interactions of the molecular switches with the surrounding matrix molecules have a big effect on how long switches stayed in the on or off state, which is critical for information storage. These states remain stable and can be read back for hours in the systems that Weiss and his colleagues designed, assembled, and measured. “These chemical interactions stabilize the “on” and “off” states, reducing random switching,” Weiss reports.

“With these studies, we have been able to confirm that we now have the predictive power to design molecular switches that can be turned on or off at will, which was a critical test of our understanding of their function.”