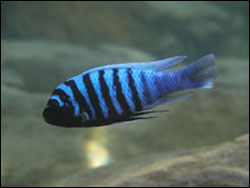 Vision, like other biological attributes, is shaped by evolution through environmental pressures and demands, and even closely-related species that are in other ways very similar might respond to their particular environments by interpreting the visual world slightly differently, using photoreceptors that are attuned to particular wavelengths of light. By studying a special group of closely-related fish species inhabiting the Great Lakes of Africa, researchers have uncovered clues to understanding how the components of color vision can undergo change over a relatively short period of evolutionary time.


The work is reported by James K. Bowmaker of University College London, Karen L. Carleton of the University of New Hampshire, and their colleagues.

Cichlid fish of the East African Rift Lakes are renowned for their diversity: Owing to migrations of ancestor species out of Lake Tanganyika and into other lakes, such as Lake Malawi, it has been estimated that hundreds of new cichlid species have arisen in these lakes in the last 100,000 years. Thanks to the relatively recent colonization by these fish of different ecological niches, as well as the prominent role of nuptual coloring in the mating preferences of these species, the cichlids offer a unique opportunity to study how color vision can undergo change in rapidly evolving species. For example, because color plays a significant role in mate choice, differences in color vision could greatly influence and even drive cichlid speciation.

In the new work, the researchers performed physiological and molecular genetic analyses of color vision in cichlid fish from Lake Malawi and demonstrated that differences in color vision between closely related species arise from individual species’ using different subsets of distinct visual pigments. The scientists showed that although an unexpectedly large group of these visual pigments are available to all the species, each expresses the pigments selectively, and in an individual way, resulting in differences in how the visual world is sensed.

The researchers identified a total of seven “cone” (color-sensing) visual pigments underlying color vision in these cichlids. They have measured the sensitivities of the cones to different wavelengths of light and isolated the seven genes that give rise to the pigment proteins. The seven cone types have maximum sensitivities ranging from the red end of the spectrum right through to the ultraviolet–light outside the range of human sensitivity. The researchers showed that in order to tune its color vision, each cichlid species primarily expresses three of the seven cone pigment genes encoded by their genomes.

It is not clear why such closely related cichlid species have evolved such different visual sensitivities, but the sensitivities most likely relate to such selective forces as foraging specializations and subtle differences in the underwater light environment. Evolutionary comparison of pigment genes suggests that other groups of fish may use a similar strategy for shaping their color vision.