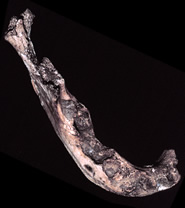 New-found jawbone hints at 200 thousand years of care in the community.

Care for the elderly and disabled may have been around a lot longer than we thought. The discovery of a jawbone scarred by severe gum disease hints that a toothless early human got by with a little help from his friends.

Minus teeth, unable to chew his or her food, the owner of the deformed jawbone nonetheless survived “for at least several months,” estimates anthropologist Erik Trinkaus of Washington University in St. Louis, Missouri. Chewing had worn the bone that had re-grown to fill the tooth sockets1.

“This individual was preferentially getting the soft bits [of food] or was getting help,” says Trinkaus. His research team discovered the mandible in France.

This level of social awareness was thought to have originated about 50 thousand years ago among our thickset cousins the Neanderthals. The jawbone pushes the date for collaborative survival way back – about 175 and 200 thousand years ago.

“It suggests pre-Neanderthals had significant elements of fully human behaviour,” says Chris Stringer an archaeologist at the Natural History Museum in London, UK. But it doesn’t tell us exactly when caring for other group members first evolved.

Until recently the social sophistication needed for group members to care one another was thought to have arisen with our direct ancestors, the early modern humans. Discoveries of elderly and diseased Neanderthals showed that they were looking out for each other around 50,000 years ago.

Markings on worn teeth from the same site suggest that pre-Neanderthals, like their Neanderthal descendants, were particularly dependent on their teeth for survival, using them to scrape off meat and crush bones. The lack of stone tools and other technology make it unlikely that a toothless individual could have processed food in any other way, says Trinkaus.

While sociable, there’s no evidence that our common ancestors, primates, care for sick or disabled members of their social groups. Studies indicate that they starve after losing their teeth, according to Trinkaus.