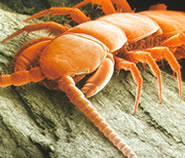 Relative values: are crustaceans or spiders closer cousins to this centipede? <br>© SPL

Four-fifths of all known creatures are arthropods. So immense is this family that no one knows who is related to whom. To resolve the relationships between the family members, the insects, spiders, crustaceans and centipedes, two research groups have performed state-of-the-art analyses – and come up with two different answers.

The main problem is the centipedes and millipedes, collectively called the myriapods. One team puts myriapods more closely related to insects and crustaceans, having pooled masses of different data. The other, looking at protein sequences alone, makes them sisters to the spiders. (See diagram below.)

Both analyses support the idea that insects and crustaceans are closely related. Molecular data recently put paid to the previous view that insects were more akin to the myriapods.

“Whichever way you slice it, there have been some major ecological shifts,” says Ward Wheeler of the American Museum of Natural History, New York.

Biologists have argued for more than a century about how arthropods – animals with exoskeletons – are related. “You can never be sure that you have the right answer”, because each group’s origins are lost in the mists of time, Wheeler explains.

The continuing uncertainty shows us that “we need more data, and we have a lot to learn about animal relationships”, adds Mark Blaxter, a genomics researcher at the University of Edinburgh. “It’s one of the most important questions about life on the planet.”

Wheeler’s team compared the anatomy, development and neurology, as well as the now-standard DNA sequences, of 51 arthropod species1. The study is “by far the most comprehensive analysis of arthropod relationships yet”, says team member Gonzalo Giribet, of Harvard University, Cambridge, Massachusetts.

Tussle of the trees: Wheeler’s version (left) lines up against Friedrich’s (right).

It took 256 linked Pentium computers one month to calculate the most plausible family tree using ’parsimony analysis’. This is the branching pattern that contains the minimum amount of evolutionary change. One desktop computer would have taken 42 years to solve the problem.

Markus Friedrich at Wayne State University in Detroit, Michigan, and his colleagues, on the other hand, compared the complete mitochondrial genome of the European centipede Lithobius forficatus to those of 15 other arthropods2. Mitochondria are cells’ energy factories; they have their own circle of DNA independent from an organism’s chromosomes.

This second analysis produced a two-forked tree, with centipedes related to spiders, despite the two groups having very different body forms. Other genetic studies have suggested such a tree, but Friedrich says he is still “expecting a lot of controversy and antagonism”.

A potential problem with Friedrich’s analysis, says Blaxter, is that the non-arthropod species used for comparison were earthworms. These, he feels, are not closely enough related to the arthropods to be a useful reference point, and could have led to the wrong tree. “I’m slightly more convinced”, by Wheeler and colleagues’ analysis, he says.

But researchers in the field disagree about arthropods a lot less than they did 10 years ago. The prospects for consensus “look very promising”, says Friedrich.