Atomic force microscopy : How cell membranes respond to their environment 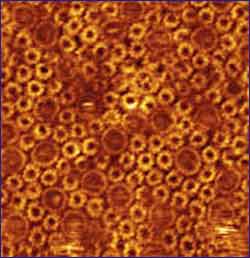 Organization of membrane proteins… Membrane organization in photosynthetic bacteria – observed by atomic force microscopy –exposed to strong light. The light-harvesting complexes (small circles) alternate geometrically with the reaction centers (large rings with central density) which manage the light energy. The reaction centers are organized so as to manage light energy, when light is strong.

Some 25% of genes code for membrane proteins. Yet membrane organization remains a mystery. Membranes envelop all the cells in our bodies, forming a natural barrier, the membrane proteins within these can also recognize certain cells and direct a drug to them.

Using atomic force microscopy, Simon Scheuring (Inserm), in a CNRS unit at the Institut Curie, and James N. Sturgis, professor at the Université de la Méditerranée (CNRS unit), have studied the organization of a bacterial membrane and how it adapts in response to external factors. This is the first time that the inner workings of a membrane have been unveiled. Scheuring and Sturgis show that the organization of membrane proteins is not fixed but can vary with membrane location and time. This work was published in the July 15, 2005 issue of Science.

The body’s innumerable cells with their specialized tasks contain organelles, which perform particular functions. If they are to operate efficiently in the right location, organelles and cells alike must be suitably differentiated and above all isolated. This is the role of the lipid bilayers that constitute membranes.

But membranes are not simple barriers, they also act as border guards, assisted by membrane proteins which oversee the comings and goings between the cell and the outside world. Membranes also relay information across the cellular divide and so are essential for communication between cells and their environment. Informative messages from outside the cell (other cells, tissues and organs) are received by membrane receptors, which activate proteins within the cell, which in turn activate other proteins, and so forth, until there is a genetic response. Once decoded, these signals enable cells to determine their position and role within the body. The signals are essential for the proliferation, differentiation, morphology and mobility of cells and for key cellular functions. These signals ensure that the size and function of organ tissues are maintained harmoniously.

Membrane proteins generally do not operate in isolation but instead combine to form protein supercomplexes. One of the best known complexes transforms light energy into ATP(2) in photosynthetic bacteria such as Rhodospirillum photometricum (see box). Atomic data on these various membrane components are relatively abundant, but until now information on the organization of these complexes has been scarce because we have lacked suitable tools.

Exploring the depths of the cell by atomic force microscopy

Simon Scheuring and James N. Sturgis have recorded high-resolution images of biological membranes under physiological conditions using atomic force microscopy, a technique developed by physicists in 1986, which provides atomic resolution images of a sample’s surface. An atomically sharp tip is scanned over the sample surface and its movements are tracked by a laser. The resulting data can be used to draw a topographical map of the sample.

Atomic force microscopy has the enormous advantage of being able to analyze samples in solution, which is a major asset for biology. Since 1995, membrane proteins have been studied by atomic force microscopy at a lateral resolution of 10 Angstroms and vertical resolution of 1 Angstrom (one ten thousand millionth of a meter). This has now defined the contours of many membrane proteins that work together in native membranes – i.e. membranes close to their natural state – thereby revealing their organization.

In photosynthetic bacteria, membrane organization changes with the intensity of incident light. In dim light, the proportion of light-harvesting complexes is higher. The reaction centers “manage” the harvested light and minimize losses. Lost light may induce the formation of free radicals that damage DNA and proteins and the bacterium itself in the longer term.

Membranes respond to the environment and adapt their organization as required. These results confirm that membranes are not homogeneous: a given membrane has several possible compositions (variable position and quantity of lipids and membrane proteins). Researchers have used this example to study general aspects of membrane organization.

In addition to enhancing our understanding of photosynthesis in bacteria, these findings amply demonstrate the value of atomic force microscopy in observing proteins in native membranes on the nanometer scale (i.e. one millionth of a millimeter). Simon Scheuring penetrates the depths of these protein complexes by observing them in situ and under physiological conditions.

Cells will progressively yield up their secrets as they are explored using a combination of high-resolution imaging, as in atomic force microscopy, optical microscopy and electron microscopy.