How fish hear and make sounds at same time 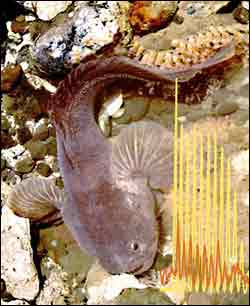 Photograph by Margaret Marchaterre, Department of Neurobiology and Behavior, Cornell University. <br>A male plainfin midshipman with his newly hatched embryos attached to the rocky substrate of his nest (top right). A graph of neural impulses over a period of a few milliseconds is superimposed over the photo. The yellow lines show nerve impulses that lead to vocal muscles and cue them to make noise. The sounds actually occur in the millisecond spaces between each yellow spike. As the sound takes place, the brain also sends an impulse to the fish’s ear (red spikes), which reduces sensitivity during intervals that coincide precisely with the noise. Copyright © Cornell UniversityClick

Cornell University researchers have learned how a common fish found along the West Coast can hum and hear outside sounds at the same time.


The study marks the first time that scientists have found a direct line of communication between the part of a vertebrate’s brain that controls the vocal muscle system and the part of the ear that hears sound. The researchers believe that understanding the auditory system of the plainfin midshipman fish (Porichthys notatus ) — a 6- to 10-inch fish found along the coastline from Alaska to California — will offer insights into how other vertebrates — including humans — hear.

The general pattern of connections between neurons in the auditory system is the same in all vertebrates, including mammals. While humans hear with the cochlea of the inner ear, the midshipman uses the sacculus, a part of the ear that in humans detects acceleration or linear movement.

Because the study indicates a relationship between the ear and the auditory and vocalization systems of the brain, it could help scientists understand some of the mechanisms that contribute to deafness.

“We’ve studied so many things about these fish, and I never cease to be amazed by how similar the operation of their nervous system is to that of mammals,” said Andrew Bass, professor of neurobiology and behavior at Cornell, and an author of the study published in the June 22 issue of the Journal of Neuroscience. “You don’t need to study a mammal to understand what a mammal does.”

The researchers found that as the fish’s brain signals vocal muscles to make sound, a number of synchronized actions take place. The ear and brain are cued to the exact timing of a self-generated sound, distinguishing it from outside sounds. Just prior to a voicing, the brain warns the ear it should become less sensitive.

When analyzed closely, the vocalizations can be broken down into a series of impulses separated in time by only milliseconds. The system is timed only to block out sound at the exact moment when the fish vocalizes, leaving the ear sensitive to outside noises during the millisecond gaps when the fish is silent. Once an impulse for vocalization ends, the brain decreases its messages to the ear, which in turn makes the ear more receptive to external sound again. In fact, for an instant following a vocalization, the ear may actually become more sensitive than it was prior to the voicing.

By better understanding these complex systems, the study offers new avenues for researchers to explore the causes of human deafness.

“Hearing loss is a major pathology that humans deal with,” said Bass. “And we don’t understand that mechanism very well. Observing what these neurons do may offer insights into what leads to hearing deficits.”

Only a few fish vocalize, but male plainfin midshipman fish hum to attract a mate or grunt when stressed. When courting, the midshipman hums continuously for up to two hours to attract a female, who may deposit up to 200 eggs, which the male fertilizes. The next night, the male hums again to attract a new mate. In one season, a successful male may end up fertilizing several thousand eggs.

During mating season, houseboat owners in San Francisco Bay have complained that their homes vibrate from the humming fish, which sound like a high-speed motor running underwater.

Co-author Matthew Weeg received his doctorate from Cornell and worked in Andrew Bass’s laboratory before recently becoming a lecturer at Colorado State University. The other co-author, Bruce Land, is a senior research associate in Cornell’s Department of Neurobiology and Behavior.