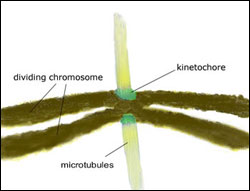 Kinetochore proteins bind to a microtubule spindle to keep chromosomes segregated during cell division. This segregation is critical for preventing mistakes that can lead to cancer and birth defects.

A key mechanism in the passing of genetic material from a parent cell to daughter cells appears to have been identified by a team of Berkeley researchers. Their study may explain how a complex of proteins, called kinetochores, can recognize and stay attached to microtubules, hollow fibers in the walls of biological cells that are responsible for the faithful segregation of chromosomes during cell division.


“In test tube experiments, we’ve found that the kinetochore proteins form rings around the microtubules and this ring formation promotes microtubule assembly, stabilizes against disassembly, and promotes bundling,” says Eva Nogales, a biophysicist who holds joint appointments with the Lawrence Berkeley National Laboratory (Berkeley Lab), the University of California at Berkeley, and the Howard Hughes Medical Institute (HHMI). “If ring formation takes place in vivo, it could be the mechanism by which chromosomes are kept segregated during mitosis.”

Nogales is one of the co-authors of a paper reporting the results of this research which appears in the January 21, 2005 issue of the journal Molecular Cell. Other authors of the Molecular Cell paper were Georjana Barnes, David Drubin and Stefan Westermann, with UC Berkeley’s Department of Molecular and Cell Biology, who were the lead investigators on this work, plus Agustin Avila-Sakar and Hong-Wei Wang, with Berkeley Lab, and Hanspeter Niederstrasser and Jonathan Wong with UC Berkeley.

Says Barnes, “Mistakes in chromosome segregation during mitosis contribute to cancer and birth defects. From various genetic experiments we know that the activity of a 10-protein complex of kinetochores, called Dam1, is responsible for the faithful segregation of chromosomes during mitosis. While we don’t know at this time that ring formation occurs in vivo, we do see in our in vitro tests that Dam1 ring formation strengthens the microtubules.”

Thousands of microtubule fibers are woven together to form a highly flexible cytoskeleton in biological cells that gives shape to cell walls and other structures, and controls the transportation of substances in and out of a cell. During cell division (mitosis), the microtubule fibers disassemble and reform into spindles across which duplicate sets of chromosomes line up. During this phase, it is critical that the spindles maintain their structural integrity so that they can segregate a single copy of each chromosome to each daughter cell. After which, the microtubules again disassemble and reform back into skeletal systems for the two new daughter cells. It has been determined, through the genetic research of Barnes and Drubin, among others, that kinetochores must bind to a microtubule spindle to avoid the gain or loss of chromosomes by each of the daughter cells. How this works, however, was unknown.

To find answers, the Berkeley researchers used a purified, reconstituted Dam1 complex, obtained from genetically engineered E. coli bacteria, and compared its effects on microtubules in vitro to the effects caused by certain Dam1 mutants. Their analysis shed new light on the structural nature of the kinetochore-microtubule interface, and may provide a biochemical explanation for the role of kinetochores in maintaining chromosome segregation during mitosis.

Furthermore, the Berkeley researchers showed that binding between the ring and the microtubule is mediated by flexible domains, and is largely electrostatic in nature. This could allow for lateral sliding or diffusion of Dam1 rings along microtubules. Analysis of the Dam1 rings after disassembly of microtubules, revealed an accumulation of rings at the ends of the microtubule, suggesting that the rings do not disassemble but slide back as the microtubule protofilaments peel away from the ends.

Says Nogales, “That the rings remain attached to the microtubule end as it depolymerizes, is a most ingenious mechanism to move chromosome to the two daughter cells during anaphase, without even requiring energy. This is great finding!”