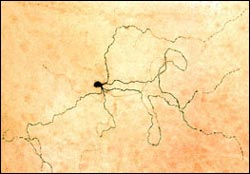 Visual clues to daily rhythms - Intrinsically photosensitive retinal ganglion cells – ipRGCs, right – were discovered in 2002. New research shows that the protein melanopsin enables ipRGCs to do their job of setting the body’s master circadian clock. It may be an extremely ancient system in terms of evolution, researchers say.

A Brown University team has found that a protein called melanopsin plays a key role in the inner workings of mysterious, spidery cells in the eye called intrinsically photosensitive retinal ganglion cells, or ipRGCs.


Melanopsin, they found, absorbs light and triggers a biochemical cascade that allows the cells to signal the brain about brightness. Through these signals, ipRGCs synchronize the body’s daily rhythms to the rising and setting of the sun. This circadian rhythm controls alertness, sleep, hormone production, body temperature and organ function. Brown researchers, led by neuroscientist David Berson, announced the discovery of ipRGCs in 2002. Their work was astonishing: Rods and cones aren’t the only light-sensitive eye cells.

Like rods and cones, ipRGCs turn light energy into electrical signals. But while rods and cones aid sight by detecting objects, colors and movement, ipRGCs gauge overall light intensity. Numbering only about 1,000 to 2,000 out of millions of eyes cells, ipRGCs are different in another way: They have a direct link to brain, sending a message to the tiny region that controls the body clock about how light or dark the environment is. The cells are also responsible for narrowing the pupil of the eye.

“It’s a general brightness detection system in the eye,” said Berson, the Sidney A. Fox and Dorothea Doctors Fox Professor of Ophthalmology and Visual Sciences. “What we’ve done now is provide more details about how this system works.”

The research, published in the current issue of Nature, provides the first evidence that melanopsin is a functional sensory photopigment. In other words, this protein absorbs light and sets off a chain of chemical reactions in a cell that triggers an electrical response. The study also showed that melanopsin plays this role in ganglion-cell photoreceptors, helping them send a powerful signal to the brain that it is day or night.

The team made the discovery by inserting melanopsin into cells taken from the kidneys and grown in culture. These cells, which are not normally sensitive to light, were transformed into photoreceptors when flooded with melanopsin. In fact, the kidney cells responded to light almost exactly the way ipRGCs do, confirming that melanopsin is the photopigment for ganglion-cell photoreceptors. “This resolves a key question about the function of these cells,” Berson said. “And so little is known about them, anything we learn is important.”

Berson and his team made another intriguing finding: The biochemical cascade sparked by melanopsin is closer to that of eye cells in invertebrates like fruit flies and squid than in spined animals such as mice, monkeys or humans. “The results may well tell us that this is an extremely ancient system in terms of evolution,” Berson said. “We may have a bit of the invertebrate in our eyes.”

The research team from Brown included lead author and post-doctoral research associate Xudong Qiu and post-doctoral research associate Kwoon Wong, both in the Department of Neuroscience, as well as graduate students Stephanie Carlson and Vanitha Krishna in the Neuroscience Graduate Program. Tida Kumbalasiri and Ignacio Provencio from the Uniformed Services University of the Health Sciences also contributed to the research.

The National Institutes of Health funded the work.